Types Of Roots, Importance Of Roots 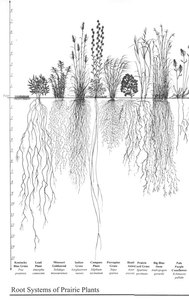 In most plants, the root system is a below-ground structure that serves primarily to anchor the plant in the soil and take up water and minerals. Roots may be less familiar than the more visible flowers, stems, and leaves, but they are no less important to the plant.

In the zone of maturation, cells differentiate and serve such functions as protection, storage, and conductance. Seen in cross section, the zone of maturation of many roots has an outer layer (the epidermis), a deeper level (the cortex), and a central region that includes the conducting vascular tissue.

Figure 1. Early stages in the development of a root tip, illustrating its four regions.

The epidermis is usually a single layer of cells at the outer edge of the root, which absorbs water and dissolved minerals, a function greatly facilitated by the presence of root hairs. Root hairs form from the outward growth of epidermal cells and are restricted to a small area near the root tip. A single four-month-old rye plant was estimated to have approximately 14 billion root hairs.

The cortex occupies most of the volume of young roots, and is important for storing substances such as starch.

At the root's center is the region of vascular tissue which functions in the transport of water up the root and into the stem (in xylem tissue), and in the transport of carbohydrates and other substances from the stem down into the root (in phloem tissue). Cells in the xylem and phloem either attach to each other end-toend or are tapered, with overlapping walls, facilitating the movement of substances from cell to cell. In many plants, a single cluster of xylem and phloem cells occupies a relatively small area of the root cross section. In other plants, a cylinder of vascular tissue forms a ring around a center of relatively undifferentiated cells, called the pith.

Another symbiotic root association is between plants such as peas and beans (family Leguminosae) and Rhizobium bacteria. The bacteria penetrate the root cells, multiply, and in doing so form nodules where the bacteria have access to carbohydrates synthesized by the plant. In return, the bacteria "fix" nitrogen, converting nitrogen gas from the atmosphere into nitrogen-containing compounds that can be used by plants.