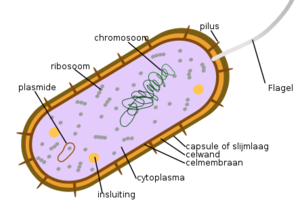 Bacteria are mostly unicellular organisms that lack chlorophyll and are among the smallest living things on earth—only viruses are smaller. Multiplying rapidly under favorable conditions, bacteria can aggregate into colonies of millions or even billions of organisms within a space as small as a drop of water.

Bacteria are classified as prokaryotes. Broadly, this taxonomic ranking reflects the fact that the genetic material of bacteria is contained in a single, circular chain of deoxyribonucleic acid (DNA) that is not enclosed within a nuclear membrane. The word prokaryote is derived from Greek meaning "prenucleus." Moreover, the DNA of prokaryotes is not associated with the special chromosome proteins called histones, which are found in higher organisms. In addition, prokaryotic cells lack other membrane-bounded organelles, such as mitochondria. Prokaryotes belong to the kingdom Monera. Some scientists have proposed splitting this designation into the kingdoms Eubacteria and Archaebacteria. Eubacteria, or true bacteria, consist of more common species, while Archaebacteria (with the prefix archae—meaning ancient) represent strange bacteria that inhabit very hostile environments. Scientists believe these bacteria are most closely related to the bacteria which lived when the earth was very young. Examples of archaebacteria are those bacteria which currently live in extremely salty environments or extremely hot environments, like geothermal vents of the ocean floor.

Under ideal conditions, the growth of a population of bacteria occurs in several stages termed lag, log, stationary, and death.

During the lag phase, active metabolic activity occurs involving synthesis of DNA and enzymes, but no growth. Geometric population growth occurs during the log, or exponential phase, when metabolic activity is most intense and cell reproduction exceeds cell death. Following the log phase, the growth rate slows and the production of new cells equals the rate of cell death. This period, known as the stationary phase, involves the establishment of an equilibrium in population numbers and a slowing of the metabolic activities of individual cells. The stationary phase reflects a change in growing condition—for example, a lack of nutrients and/or the accumulation of waste products.

Most bacteria thrive at temperatures at or around that of the human body 98.6°F (37°C), and some, such as Escherichia coli, are normal parts of the human intestinal flora. These organisms are mesophiles (moderate-temperature-loving), with an optimum growth temperature between 77°F (25°C) and 104°F (40°C). Mesophiles have adapted to thrive in temperatures close to that of their host.

Psychrophiles, which prefer cold temperatures, are divided into two groups. One group has an optimal growth temperature of about 59°F (15°C), but can grow at temperatures as low as 32°F (0°C). These organisms live in ocean depths or Arctic regions. Other psychrophiles that can also grow at 32°F (0°C) have an optimal growth temperature between 68°F (20°C) and 86°F (30°C). These organisms, sometimes called psychrotrophs, are often those associated with food spoilage under refrigeration.

Thermophiles thrive in very hot environments, many having an optimum growth temperature between 122°F (50°C) and 140°F (60°C), similar to that of hot springs in Yellowstone National Park. Such organisms thrive in compost piles, where temperatures can rise as high as 140°F (60°C). Extreme thermophiles grow at temperatures above 195°F (91°C). Along the sides of hydrothermal vents on the ocean bottom 217 mi (350 km) north of the Galapagos Islands, for example, bacteria grow in temperatures that can reach 662°F (350°C).

Like temperature, pH also plays a role in determining the ability of bacteria to grow or thrive in particular environments. Most commonly, bacteria grow optimally within a narrow range of pH between 6.7 and 7.5.

Acidophiles, however, prefer acidic conditions. For example, Thiobacillus ferrooxidans, which occurs in drainage water from coal mines, can survive at pH 1. Other bacteria, such as Vibrio cholera, the cause of cholera, can thrive at a pH as high as 9.0.

Osmotic pressure is another limiting factor in the growth of bacteria. Bacteria are about 80-90% water; they require moisture to grow because they obtain most of their nutrients from their aqueous environment.

Cell walls protect prokaryotes against changes in osmotic pressure over a wide range. However, sufficiently hypertonic media at concentrations greater than those inside the cell (such as 20% sucrose) cause water loss from the cell by osmosis. Fluid leaves the bacteria causing the cell to contract, which, in turn, causes the cell membrane to separate from the overlying cell wall. This process of cell shrinkage is called plasmolysis.

Because plasmolysis inhibits bacterial cell growth, the addition of salts or other solutes to a solution inhibits food spoilage by bacteria, as occurs when meats or fish is salted.

When bacteria are placed in hypotonic media with concentrations weaker than the inside of the cell, water tends to enter by osmosis. The accumulation of this water causes the cell to swell and then to burst, a process called osmotic lysis.

Carbon, nitrogen and other growth factors

In addition to water and the correct salt balance, bacteria also require a wide variety of elements, especially carbon, hydrogen, and nitrogen, sulfur and phosphorus, potassium, iron, magnesium and calcium. Growth factors, such as vitamins and pyrimidines and purines (the building blocks of DNA), are also necessary.

Carbon is the fundamental building block of all the organic compounds needed by living things, including nucleic acids, carbohydrates, proteins and fats.

Saprophytes are heterotrophs that obtain their carbon from decaying dead organic matter. Many different soil bacteria release plant nitrogen as ammonia (ammonification). Other bacteria, the Nitrosomonas, convert ammonia to nitrite, while Nitrobacter convert nitrite to nitrate. Other bacteria, especially Pseudomonas, convert nitrate to nitrogen gas. These bacteria complement the activity of nitrogen-fixing bacteria (for example, Rhizobium), which fix nitrogen from the atmosphere and make it available to leguminous plants, and Azotobacter, which are also found in fresh and marine waters. Together, the activity of these bacteria underlies the nitrogen cycle, by which the gas is taken up by living organisms, used to make proteins and other organic compounds, returned to the soil during decay, then released into the atmosphere to be reused by living things.

Oxygen may or may not be a requirement for a particular species of bacteria, depending on the type of metabolism used to extract energy from food (aerobic or anaerobic). In all cases, the initial breakdown of glucose to pyruvic acid occurs during glycolysis, which produces a net gain of two molecules of the energy-rich molecule adenosine triphosphate (ATP).

During aerobic respiration, enzymes remove electrons from the organic substrate and transfer them to the electron transport chain, which is located in the membrane of the mitochondrion. The electrons are transferred along a chain of electron carrier molecules. At the final transfer position, the electrons combine with atoms of oxygen—the final electron acceptor—which in turn combines with protons (H+) to produce water molecules. Energy, in the form of ATP, is also made here. Along the chain of electron carriers, protons that are pumped across the mitochondrial membrane re-enter the mitochondrion. This flow of electrons across the membrane fuels oxidative phosphorylation, the chemical reaction that adds a phosphate group to adenosine diphosphate (ADP) to produce ATP.

Anaerobic bacteria use inorganic substances other than oxygen as a final electron acceptor. For example, Pseudomonas and Bacillus reduce nitrate ion (NO 3 ) to nitrite ion (NO 2 ), nitrous oxide (N2O) or nitrogen gas (N2). Clostridium species, which include those that cause tetanus and botulism, are obligate anaerobes. That is, they are not only unable to use molecular oxygen to produce ATP, but are harmed by toxic forms of oxygen formed during aerobic respiration. Unlike aerobic bacteria, obligate anaerobes lack the ability synthesize enzymes to neutralize these toxic forms of oxygen.