What Is Water?, An Unusual Liquid 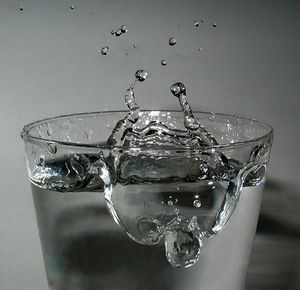 Water is the most abundant liquid on Earth. It covers more than 70% of the earth's surface. Including the clouds (which are, of course, also water), it makes our entire planet look blue and white from space.

The earth's supply of water is constantly being recycled. It is evaporated from the oceans by the sun and is given off by the forests. The vapor condenses into clouds, which rain out onto the land. The land water runs off into the lakes and rivers, which then run back to the seas, and the cycle is complete. The total amount of water on Earth, in the form of oceans, lakes, rivers, clouds, polar ice, etc. is 1.5 × 1018 (one-and-a-half billion) tons, occupying a total volume of 8.7 million cubic miles.

It is impossible to overstate the importance of water to almost every process on Earth, from the life processes of the lowest bacteria to the shaping of continents. Water is the most familiar of all chemical compounds known to humans. It is essential to all living things, plant and animal. We drink it, we wash with it, we play in it and we cook in it. In fact, we ourselves are more than half water.

We never see absolutely pure water because it dissolves so many substances. If we want pure water we have to prepare it laboriously by such means as distillation, ion exchange, and reverse osmosis. Moving water even dissolves rock slightly, to form caves and to wear away mountains. All of the water on Earth, therefore, is in the form of solutions. The dissolved substances change the properties of water from what they would be in absolutely pure water. They affect its freezing point and its boiling point, among many other physical and chemical properties. The dissolved or suspended substances in water can be in the form of ions, molecules, or larger particles. For drinking water, bacteria must also be killed.