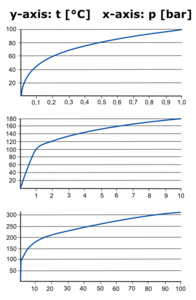 The boiling point of a liquid substance is the temperature at which the vapor pressure of the liquid equals the external pressure on the liquid. Vapor bubbles form in the liquid, rise to the surface and burst, causing the liquid to boil.

At room temperature, in a closed system, there is an equilibrium between the liquid and its vapor phase. For example, if a glass of water is left open, the water will eventually evaporate, although it may take a few days. On the other hand, if the glass is kept covered, when the cover is removed, there is a large amount of water on the bottom of the cover. The molecules of the liquid in the glass move into the vapor phase, but when they encounter the cold surface of the cover, they condense back into liquid form and fall back into the liquid. When the rate of movement of molecules into the gas phase from the liquid equals the rate of movement of molecules into the liquid phase from the gas phase, the two phases are in equilibrium.

When the temperature is raised, more molecules have enough energy to enter the gas phase. If the glass were left uncovered, the water would disappear more quickly. If the glass was kept covered, a new equilibrium would be established more quickly. As the temperature increases, more molecules enter the gas phase and the vapor pressure of the liquid increases.