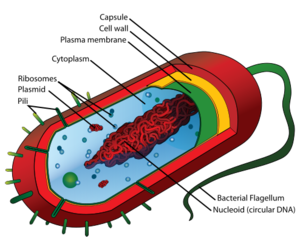 The cell is the smallest living component of organisms and is the basic unit of life. In multicellular living things, a collection of cells that work together to perform similar functions is called a tissue; various tissues that perform coordinated functions form organs; and organs that work together to perform general processes form body systems. The human digestive system, for example, is composed of various organs including the stomach, pancreas, and the intestines. The tissue that lines the intestine is called epithelial tissue. Epithelial tissue, in turn, is composed of special cells called epithelial cells. In the small intestine, these epithelial cells are specialized for their absorptive function: each epithelial cell is covered with thousands of small projections called microvilli. The numerous microvilli greatly increase the surface area of the small intestine through which nutrients can be absorbed into the bloodstream.

The organelles found in eukaryotes include the membrane system consisting of plasma membrane, endoplasmic reticulum, Golgi body, and vesicles; the nucleus; cytoskeleton; and mitochondria. In addition, plant cells have special organelles not found in animals cells. These organelles are the chloroplasts, cell wall, and vacuoles.

Plant cells have several organelles not found in animal cells. These are plastids, vacuoles, and a cell wall.

Plant vacuoles are large vesicles bound by a single membrane. In many plant cells, they occupy about 90% of the cellular space. They perform a variety of functions in the cell, including storage of organic compounds, waste products, pigments, and poisonous compounds, as well as digestive functions.

All plant cells have a cell wall that overlies the plasma membrane. The cell wall of plants consists of a tough carbohydrate substance called cellulose laid down in a matrix or network of other carbohydrates. The cell wall provides an additional layer of protection between the contents of the cell and the outside environment. The crunchiness of an apple, for instance, is attributed to the presence of these cell walls.

—A type of cytoskeletal filament that has contractile properties.

—Green organelle in higher plants and algae in which photosynthesis occurs.

—A plant cell plastid that contains yellow and orange pigments.

—Short projections consisting of microtubules that cover the surface of some cells and provide for movement.

—The side (or "face") of the Golgi body that receives vesicles containing macromolecules.

—pl., cristae, the folds of the inner membrane of a mitochondrion.

—A network of assorted protein filaments attached to the cell membrane and to various organelles that makes up the framework for cell shape and movement.

—The network of membranes that extends throughout the cell; involved in protein synthesis and lipid metabolism.

—A theory that proposes that mitochondria, chloroplasts, and other eukaryotic organelles originally arose within cells by symbiosis between a single-celled prokaryote and another prokaryote.

—A cell whose genetic material is carried on chromosomes inside a nucleus encased in a membrane. Eukaryotic cells also have organelles that perform specific metabolic tasks and are supported by a cytoskeleton which runs through the cytoplasm, giving the cell form and shape.

—Thread-like appendage of certain cells, such as sperm cells, which controls their locomotion.

—The organelle that manufactures, sorts, and transports macromolecules within a cell.

—Sacs within a chloroplast that contain photosynthetic enzymes.

—"Water-loving;" describes the phosphate portion of a phospholipid.

—"Water-hating;" describes the fatty acid portion of a phospholipid.

—A type of cytoskeletal filament that anchors organelles.

—A vesicle that contains digestive enzymes.

—The inner space of a mitochondrion formed by cristae.

—A type of cytoskeletal filament; the component of centrioles, flagella, and cilia.

—The power-house of the cell; contains the enzymes necessary for the oxidation of food into energy.

—The double membrane that surrounds the nucleus.

—The region in a prokaryote where the cell's DNA is located.

—The darker region within the nucleolus where ribosomal subunits are manufactured.

—The control center of a cell; contains the DNA.

—A membrane-bounded cellular "organ" that performs a specific set of functions within a eukaryotic cell.

—A vesicle that oxidizes fats and other substances and stores hydrogen peroxide.

—A molecule consisting of a phosphate head and two fatty acid chains that dangle from the head; the component of the plasma membrane.

—The double layer of phospholipids that compose the plasma membrane.

—In plants, the process in which carbon dioxide and water are converted to sugars.

—Short projections that assist bacteria in attaching to tissues.

—The membrane of a cell.

—A cell without a true nucleus.

—RNA; the molecule translated from DNA in the nucleus that directs protein synthesis in the cytoplasm; it is also the genetic material of many viruses.

—A protein composed of two subunits that functions in protein synthesis.

—The material that bathes the interior of chloroplasts in plant cells.

—The relationship between the surface area provided by the plasma membrane to the volume of the contents of a cell.

—A membranous structure that bisects the interior of a chloroplast.

—The side (or "face") of a Golgi body that releases macromolecule-filled vesicles for transport.

—A protein that comprises microtubules.

—A membrane-bound sphere that contains a variety of substances in cells.