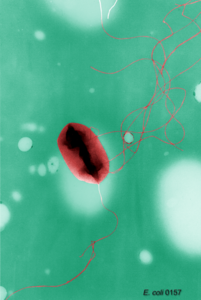 Bacteria can have a single flagellum or multiple flagella in a number of patterns. A single flagellum is located False-color transmission electron micrograph (TEM) of the aerobic soil bacterium Pseudomonas fluorescens, flagellae curving behind the orange cell, magnification at x10,000. .
at the tail end of a bacterium similar to the position occupied by a propeller on a submarine. Monotrichous is the term used to describe a single flagellum with this polar orientation. Bacteria with multiple flagella may have one at each end (amphitrichous), several at one end (lophotrichous), or several all around their perimeter (peritrichous).

Flagellar movement is chemically driven. Environmental nutrients attract motile bacteria; while other substances repulse them. This reactive motility is called chemotaxis. The sensation of chemical gradients translates into a proton flow into the bacterial cell. These protons power a pump which rotates the flagellar base (or hook) at about 150 revolutions per second. When the hook rotates counter-clockwise, a bacterium will move toward a chemical attractant. If the hook rotates clockwise, then a bacterium falls, or tumbles, aimlessly until it senses a more favorable position.

Eukaryotic flagella are very different from bacterial flagella. The tubulins of eukaryotic flagella are arranged in a microtubule array of nine doublets surrounding two singlets along the length of the flagella, sort of like straws standing up in a cylindrical straw-container. These "straws" slide along each other to generate movement and are connected by protein spokes to regulate their interaction. This sliding motion generates the flagellar beat which begins at the base (next to the cell) and is propagated away from the cell (distally) in a standing wave. This beat occurs in a single plane with a whip-like movement.

Flagellar movement can be visualized using specialized microscopic techniques. Flagella are usually 12-30 nm in diameter and much longer than the cell which they move. Because they are so thin, they can not be seen with normal light microscopy. Instead scientists use staining techniques or phase-contrast microscopy to visualize them. Phase-contrast microscopy accentuates differences in how light bends as it passes through the specimen observed. Motile bacteria will appear either oval, oblong or spiral; whereas sperm look triangular with rounded corners. Cells such as the photosynthetic protist Chlamydomonas reinhardtii, which have two flagella at one end, will appear as though they are doing the breaststroke.

A number of environmental factors greatly influence the stability of the flagellar structure. In both prokaryotes and eukaryotes, an acidic pH will cause flagella to fall off. In addition, very cold temperatures will lead to disassembly of the flagellar proteins. However, flagella will reassemble with a change to an environment with a neutral pH or normal temperature.