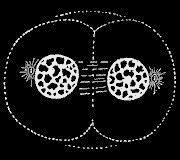 Cell division is the process where a single living cell splits to become two or more distinct new cells. All cells divide at some point in their lives. Cell division occurs in single-celled organisms like bacteria, in which it is the major form of reproduction (binary fission), or in multicellular organisms like plants, animals, and fungi. Many cells continually divide, such as the cells that line the human digestive tract or the cells that make up human skin. Other cells divide only once.

There are two major ways in which biologists categorize cell division. The first, mitosis, is simple cell division that creates two daughter cells that are genetically identical to the original parent cell. The process varies slightly between prokaryotic and eukaryotic organisms. In eularyotes, mitosis begins with replication of the deoxyribonucleic acid (DNA) within the cell to form two copies of each chromosome. Once two copies are present, the cell splits to become two new cells by cytokinesis, or formation of a fissure. Mitosis occurs in most cells and is the major form of cell division.

The second process, called meiosis is the production of daughter cells having half the amount of genetic material as the original parent cell. Such daughter cells are said to be haploid. Meiosis occurs in human sperm and egg production in which four haploid sex cells are produced from a single parent precursor cell. In both mitosis and meiosis of nucleated cells, shuffling of chromosomes creates genetic variation in the new daughter cells. These very important shuffling processes are known as independent assortment and random segregation of chromosomes.

Although prokaryotes (i.e., non-nucleated unicellular organisms) divide through binary fission, eukaryotes undergo a more complex process of cell division because DNA is packed in several chromosomes located inside a Cell dividing by mitosis. cell nucleus. In eukaryotes, cell division may take two different paths, in accordance with the cell type involved. Mitosis is a cellular division resulting in two identical nuclei is performed by somatic cells. The process of meiosis results in four nuclei, each containing half of the original number of chromosomes. Sex cells or gametes (ovum and spermatozoids) divide by meiosis. Both prokaryotes and eukaryotes undergo a final process, known as cytoplasmatic division, which divides the parental cell in new daughter cells.

The series of stages that a cell undergoes while progressing to division is known as cell cycle. Cells under-going division are also termed competent cells. When a cell is not progressing to mitosis, it remains in phase G0("G" zero). Therefore, the cell cycle is divided into two major phases: interphase and mitosis. Interphase includes the phases (or stages) G1, S, and G2 whereas mitosis is subdivided into prophase, metaphase, anaphase and telophase.

The cell cycle starts in G1, with the active synthesis of RNA and proteins, which are necessary for young cells to grow and mature. The time G1 lasts, varies greatly among eukaryotic cells of different species and from one tissue to another in the same organism. Tissues that require fast cellular renovation, such as mucosa and endometrial epithelia, have shorter G1 periods than those tissues that do not require frequent renovation or repair, such as muscles or connective tissues.

The cell cycle is highly regulated by several enzymes, proteins, and cytokines in each of its phases, in order to ensure that the resulting daughter cells receive the appropriate amount of genetic information originally present in the parental cell. In the case of somatic cells, each of the two daughter cells must contain an exact copy of the original genome present in the parental cell. Cell cycle controls also regulate when and to what extent the cells of a given tissue must proliferate, in order to avoid abnormal cell proliferation that could lead to dysplasia or tumor development. Therefore, when one or more of such controls are lost or inhibited, abnormal overgrowth will occur and may lead to impairment of function and disease.

Cells are mainly induced into proliferation by growth factors or hormones that occupy specific receptors on the surface of the cell membrane, being also known as extra-cellular ligands. Examples of growth factors are as such: epidermal growth factor (EGF), fibroblastic growth factor (FGF), platelet-derived growth factor (PDGF), insulin-like growth factor (IGF), or by hormones. PDGF and FGF act by regulating the phase G2 of the cell cycle and during mitosis. After mitosis, they act again stimulating the daughter cells to grow, thus leading them from G0 to G1. Therefore, FGF and PDGF are also termed competence factors, whereas EGF and IGF are termed progression factors, because they keep the process of cellular progression to mitosis going on. Growth factors are also classified (along with other molecules that promote the cell cycle) as pro-mitotic signals. Hormones are also pro-mitotic signals. For example, thyrotrophic hormone, one of the hormones produced by the pituitary gland, induces the proliferation of thyroid gland's cells. Another pituitary hormone, known as growth hormone or somatotrophic hormone (STH), is responsible for body growth during childhood and early adolescence, inducing the lengthening of the long bones and protein synthesis. Estrogens are hormones that do not occupy a membrane receptor, but instead, penetrate the cell and the nucleus, binding directly to specific sites in the DNA, thus inducing the cell cycle.

Anti-mitotic signals may have several different origins, such as cell-to-cell adhesion, factors of adhesion to the extra-cellular matrix, or soluble factor such as TGF beta (tumor growth factor beta), which inhibits abnormal cell proliferation, proteins p53, p16, p21, APC, pRb, etc. These molecules are the products of a class of genes called tumor suppressor genes. Oncogenes, until recently also known as proto-oncogenes, synthesize proteins that enhance the stimuli started by growth factors, amplifying the mitotic signal to the nucleus, and/or promoting the accomplishment of a necessary step of the cell cycle. When each phase of the cell cycle is completed, the proteins involved in that phase are degraded, so that once the next phase starts, the cell is unable to go back to the previous one. Next to the end of phase G1, the cycle is paused by tumor suppressor gene products, to allow verification and repair of DNA damage. When DNA damage is not repairable, these genes stimulate other intracellular pathways that induce the cell into suicide or apoptosis (also known as programmed cell death). To the end of phase G2, before the transition to mitosis, the cycle is paused again for a new verification and "decision:" either mitosis or apoptosis.

Along each pro-mitotic and anti-mitotic intra-cellular signaling pathway, as well as along the apoptotic pathways, several gene products (proteins and enzymes) are involved in an orderly sequence of activation and inactivation, forming complex webs of signal transmission and signal amplification to the nucleus. The general goal of such cascades of signals is to achieve the orderly progression of each phase of the cell cycle.

Interphase is a phase of cell growth and metabolic activity, without cell nuclear division, comprised of several stages or phases. During Gap 1 or G1 the cell resumes protein and RNA synthesis, which was interrupted during mitosis, thus allowing the growth and maturation of young cells to accomplish their physiologic function. Immediately following is a variable length pause for DNA checking and repair before cell cycle transition to phase S during which there is synthesis or semi-conservative replication or synthesis of DNA. During Gap 2 or G2, there is increased RNA and protein synthesis, followed by a second pause for proofreading and eventual repairs in the newly synthesized DNA sequences before transition to Mitosis.

At the start of mitosis the chromosomes are already duplicated, with the sister-chromatids (identical chromosomes) clearly visible under a light microscope. Mitosis is subdivided into prophase, metaphase, anaphase and telophase.

During prophase there is a high condensation of chromatids, with the beginning of nucleolus disorganization and nuclear membrane disintegration, followed by the start of centrioles' migration to opposite cell poles. During metaphase the chromosomes organize at the equator of a spindle apparatus (microtubules), forming a structure termed metaphase plate. The sister-chromatids are separated and joined to different centromeres, while the microtubules forming the spindle are attached to a region of the centromere termed kinetochore. During anaphase there are spindles, running from each opposite kinetochore, that pull each set of chromosomes to their respective cell poles, thus ensuring that in the following phase each new cell will ultimately receive an equal division of chromosomes. During telophase, kinetochores and spindles disintegrate, the reorganization of nucleus begins, chromatin becomes less condensed, and the nucleus membrane start forming again around each set of chromosomes. The cytoskeleton is reorganized and the somatic cell has now doubled its volume and presents two organized nucleus.

Cytokinesis usually begins during telophase, and is the process of cytoplasmatic division. This process of division varies among species but in somatic cells, it occurs through the equal division of the cytoplasmatic content, with the plasma membrane forming inwardly a deep cleft that ultimately divides the parental cell in two new daughter cells.