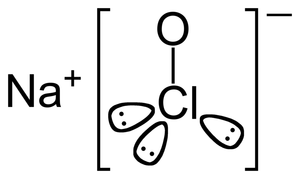 Sodium hypochlorite (NaOCl) is a chemical compound consisting of sodium, oxygen, and chlorine that has been used for centuries for bleaching and disinfecting. Today, sodium hypochlorite (commonly called chorine bleach) is mass produced by the chlorination of soda ash and is employed in many household products, including laundry bleaches, hard surface cleaners, mold and mildew removers, and drain cleaners.

Sodium hypochlorite is the salt formed by a negatively charged hypochlorite ion (OCl-) and a positively charged sodium ion (Na+). Pure hypochlorite is highly reactive and unstable; therefore, it is usually supplied as a dilute aqueous solution. In solution, hypochlorite eventually decomposes to yield a variety of byproducts including oxygen, chlorine gas, and salt. One of these byproducts, hypochlorous acid, is a powerful oxidizing agent (meaning it can accept electrons from other materials) that lends hypochlorite excellent bleaching and disinfecting abilities. The term "available chlorine" is often used to describe the concentration of hypochlorous acid in solution (which provides a measure of the solution's oxidative ability).

Due to its reactive nature, hypochlorite is particularly sensitive to the presence of trace metals such as copper, nickel, iron, chromium, cobalt and manganese that catalyze its decomposition. In fact, it is so reactive that it will aggressively attack many materials, including rubber, most types of fabrics, and certain plastics. Therefore, care must be taken in handling and storing hypochlorite solutions; all vessels should be glass, PVC plastic, porcelain, or glazed earthenware.

Hypochlorite was first produced in 1789 in Javelle, France, by passing chlorine gas through a solution of sodium carbonate. The resulting liquid, known as "Eau de Javelle" or "Javelle water" was a weak solution of sodium hypochlorite. However, this process was not very efficient and alternate production methods were sought. One such method involved the extraction of chlorinated lime (known as bleaching powder) with sodium carbonate to yield low levels of available chlorine. This method was commonly used to produce hypochlorite solutions for use as a hospital antiseptic which was sold under the trade names "Eusol" and "Dakin's solution." Near the end of the nineteenth century, E. S. Smith patented a method of hypochlorite production involving hydrolysis of brine to produce caustic soda and chlorine gas which then mix to form hypochlorite. Both electric power and brine solution were in cheap supply at this time and various enterprising marketers took advantage of this situation to satisfy the market's demand for hypochlorite. Bottled solutions of hypochlorite were sold under numerous trade names; one such early brand produced by this method was called Parozone. Today, an improved version of this method, known as the Hooker process, is the only large scale industrial method of sodium hypochlorite production.

Over the last few hundred years, one of the primary uses for sodium hypochlorite has been for the bleaching of fabrics, particularly cotton. Virgin cotton fibers are not pure white and must be processed to remove their natural coloration. Cotton bleaching has been practiced since the time of ancient the Egyptians who exposed fabric to sunlight to cause whitening. Even as late as the end of the eighteenth century, the British textile industry would bleach linen fabric by soaking it in sour milk for at least 48 hours, then exposing it to sunlight by laying out miles of treated fabrics on specially designated grasslands. In the 1800s, C. Berthellot attempted to take advantage of chlorine's bleaching ability, but, because it is a gas in its natural state, the chlorine was difficult to control. Subsequently, a process was developed to deliver chlorine as a dry powder by treating calcium carbonate with chlorine gas. However, this method of bleaching was far from ideal since it resulted in damage to the fabric wherever the concentrated hypochlorite powder came into contact with the fibers. Industrial fabric bleaching was vastly improved with the development of commercial bottled solutions of hypochlorite (also called chlorine bleach). Sodium hypochlorite gained widespread use not only as for industrial fabric treatment but also as a home laundry bleach. It is still sold today as a 5% solution in water.

Another important use for hypochlorite is as a sanitizer or disinfectant. Both of these uses rely on the hypochlorite's ability to destroy microorganisms. The same oxidative mechanism responsible for hypochlorite's bleaching ability also makes it an effective germicide. Although this mechanism was not understood at the time, hypochlorite (in the form of bleaching powder) was used as early as 1800 to counteract bad odors associated with disease. In fact, it has been said that no single element has played so important a role in combating disease over the last century as chlorine in its various forms. It should also be noted that hypochlorite is corrosive at high concentrations and was only used on the skin at very dilute levels. Its disinfectant properties have also been utilized for the sanitization of food processing equipment, particularly milking utensils used in the dairy industry. One marked advantage of hypochlorite for these applications is the fact that it, in addition to working quickly, rapidly breaks down to innocuous compounds. For this reason it is also useful in chlorination of sewage effluents and swimming pool water. Today, its primary uses are in lavatory bowl deodorizers and sanitizers.

New and improved ways to use hypochlorite are still being developed. In recent years, a number of improved bleach-containing products have been brought to market as chemists have learned to combine sodium hypochlorite with cleaning agents, thickeners and fragrance compounds to create efficacious products with improved aesthetic properties. For example, hypochlorite-based hard surface cleaners for kitchen counter tops, mold and mildew removers for showers and baths, and drain cleaners for kitchen and bathroom sinks are now commercially available.

—A measure of the oxidative potential of a chlorine containing solution.

—A dry bleach made by treating calcium carbonate with chlorine gas.

—A chemical element whose strong oxidizing abilities make it useful as a disinfectant and deodorizer.

—An aqueous solution of hypochlorite (approximately 0.5%) in water used as a hospital antiseptic.

—The first known production of hypochlorite which was made by passing chlorine gas through a solution of sodium carbonate.

—A chemical compound consisting of sodium, oxygen and chlorine (NaOCL) which has been used for centuries for its bleaching and disinfectant properties.