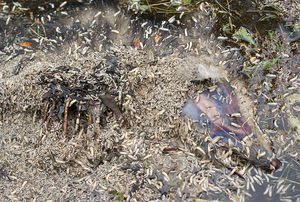 Decomposition is the natural process by which large organic materials and molecules are broken down into simpler ones. The ultimate products of decomposition are simple molecules, such as carbon dioxide and water. Sometimes misunderstood as being undesirable, decomposition is actually an extremely vital ecological process. Living organisms are composed of cells and tissues, which are in turn made of complex organic molecules, including many that are large by molecular standards. Such large molecules are termed, macromolecules. Examples of macromolecules include cellulose, which comprises plant cell walls, triglyceride fats within animal cells, and proteins of plants, animals, fungi, protozoans, and bacteria. While alive, cells and whole organisms constantly maintain and add to the macromolecules necessary for life, in effect counteracting decomposition. Upon death, however, such maintenance and growth functions cease. Decomposition, then, begins the process of breaking cells down into their component molecules, and macromolecules into simpler organic and inorganic molecules. If decomposition did not occur, the world would be overcome with mountainous piles of dead biomass.

Decomposition is a process that recycles nutrients back to the soil from formerly living organisms. The process can involve soil organisms breaking-down large pieces of organic matter into smaller ones. Earthworms, insects, and snails are examples of animals involved in the initial stages of the decomposition process. Detritus is the term given to the disintegrated organic material produced by these animals. Earthworms are examples of detritivores, or organisms that consume detritus for energy. After larger particles are broken down, microorganisms further the decomposition process by secreting chemicals that digest organic material in detritus. The most prominent organisms that do this are bacteria and fungi. Bacteria and fungi that thrive in soil and feed upon dead organic matter are called saprophytes. Detritivores and saprophytes are essential in the recycling and disintegration processes of decomposition. The partially digested organic material left in soil, called humus, is then available for plants to use.

Humus is a soil component essential for plant growth. Found largely in topsoil, humus is created from dead living material in a process called humification. Humification of dead plant matter, for example, involves not only decomposition processes of detritivores, but also the physical action of weathering such as freezing, thawing, drying, and erosion. Humus is a major source of nutrients for plants. Essential minerals slowly leach from humus into the surrounding soil water, which are then absorbed by plant roots. Acting somewhat like a sponge, humus also helps retain soil moisture, while simultaneously keeping soil aerated by preventing compaction.

Humans can also make use of the natural process of decomposition. Composting is the gathering of waste organic material, most often plant material, into an aerated pile to facilitate partial decomposition into humus. The organic humus can then be used as a soil conditioner and fertilizer for gardens or on agricultural land. Normally, the process of decomposition can take a long time. However, in compost piles, the decomposition of organic matter is accelerated by turning to enhance oxygen availability, and by the build-up of heat and moisture. In compost piles, the action of saprophytes creates heat, which helps accelerate the entire process. The center of the compost pile is insulated from the exterior by the outer debris, and retains moisture well.