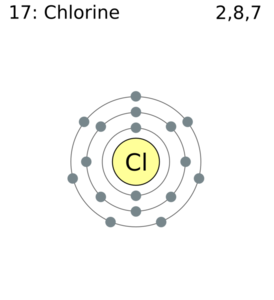 Chlorine is a highly poisonous, greenish yellow gas, about two and a half times as dense as air, and with a strong, sharp, choking odor. It was, in fact, one of the first poisonous gases used in warfare—in 1915 during World War I. In spite of its disagreeable nature, there are so many everyday products that contain chlorine or are manufactured through the use of chlorine that it is among the top ten chemicals produced in the United States each year. In 1994, more than 24 billion lb (11 billion kg) of chlorine were produced.

In nature, chlorine is widely distributed over the earth in the form of the salt (sodium chloride) in sea water. At an average concentration of 0.67 oz (19 g) of chlorine in each liter of sea water, it is estimated that there are some 1016 tons of chlorine in the world's oceans. Other compounds of chlorine occur as minerals in the earth's crust, including huge underground deposits of solid sodium chloride.

Along with fluorine, bromine, iodine and astatine, chlorine is a member of the halogen family of elements in group 17 of the periodic table-the most non-metallic (least metallic) and most highly reactive group of elements. Chlorine reacts directly with nearly all other elements; with metals, it forms salts called chlorides. In fact, the name halogen, meaning salt producer, was originally defined for chlorine (in 1811 by J. S. C. Schweigger), and it was later applied to the rest of the elements in this family.