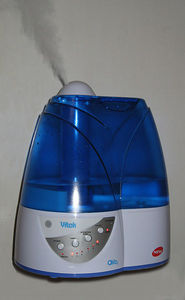 Ultrasonics or ultrasound, derived from the Latin words "ultra," meaning beyond, and "sonic," meaning sound, is a term used to describe sound waves that vibrate more rapidly than the human ear can detect.

The technical name for one expansion and one compression is a cycle. Thus, a vibration rate of 50 cycles per second produces 50 expansions and 50 compressions each second. The term frequency designates the number of cycles per unit of time that a sound wave vibrates. One cycle per second is called a hertz and is abbreviated Hz. Other useful units of scale in ultrasonics are kilohertz (kHz), which represents 1,000 Hz; and megahertz (MHz), representing 1,000,000 Hz or 1,000 kHz.

Most people can only detect frequencies of sound that fall between 16 and 16,000 Hz. Ultrasonics has come to describe sound waves with frequencies greater than 16,000 Hz, or 16 kHz. Some insects can produce ultrasound with frequencies as high as 40 kHz. Small animals

A sound wave that causes compressions and expansions of the molecules in the medium surrounding it as it propagates is called a longitudinal wave. The distance from one compression to the next is known as the wavelength of the sound wave. Sound waves with long wavelengths pass over small objects in much the same way that ocean waves pass over small objects. Sound waves with short wavelengths, on the other hand, tend to be diffracted or scattered by objects comparable to them in size.

The number of applications for ultrasound seems to be limited only by the human imagination. There are literally dozens of ways that people have already found to make use of ultrasound.

Ultrasound has been used to bind, or coagulate, solid or liquid particles that are present in dust, mist, or smoke into larger clumps. The technique is used in a process called ultrasonic scrubbing, by which particulate matter is coagulated in smokestacks before it pollutes the atmosphere. Coagulation has also been used at airports to disperse fog and mist.

In ultrasonic humidification, water is reduced to a fine spray by means of ultrasonic vibrations. The water droplets are propelled into a chamber where they are mixed with air, and a mist of air and water leaves the humidifier and enters the room to be humidified.

Ultrasonic waves can be used to break up fat globules in milk, so that the fat mixes with the milk (homogenization). In addition, pasteurization, the removal of harmful bacteria and microorganisms, is sometimes done ultrasonically.

By attaching an ultrasonic impact grinder to a magnetostrictive transducer and using an abrasive liquid, holes of practically any shape can be drilled in hard, brittle materials such as tungsten carbide or precious stones. The actual cutting or drilling is done by feeding an abrasive material, frequently silicon carbide or aluminum oxide, to the cutting area.

In ultrasonic soldering, high frequency vibrations are used to produce microscopic bubbles in molten solder. This process removes the metal oxides from the joint or surface to be soldered, and eliminates the need for flux.

Conversations can be overheard without using microphones by directing ultrasonic waves at the window of the room being monitored. Sounds in the room cause the window to vibrate; the speech vibrations produce characteristic changes in the ultrasonic waves that are reflected back into the monitor. A transducer can be used to convert the reflected vibrations to electrical signals that can be reconstructed as audible sounds.

—One wave expansion and compression.

—A unit of measurement for frequency, abbreviated Hz. One hertz is one cycle per second.

—A material that becomes electrically charged when compressed, generating an electric current.

—Another term for ultrasonic waves; sometimes reserved for medical applications.

—The distance between two consecutive crests or troughs in a wave.