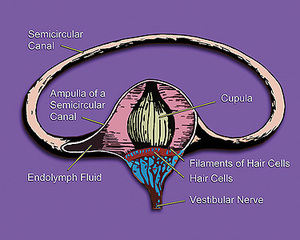 The human ear is the anatomical structure responsible for hearing and balance. The ear consists of three parts: the outer, middle, and inner ears.

The two flap-like structures on either side of the head commonly called ears are actually the pinnas of the outer ear. Pinnas are skin-covered cartilage, not bone, and are therefore flexible. The lowest portion of the pinna is called the lobe or lobule and is the most likely site for earrings. The pinnas of most humans cannot move, but these structures are very mobile in other mammals, such as cats and dogs.

The external auditory canal is a passageway in the temporal lobe of the skull that begins at the ear and extends inward and slightly upwards. In the adult human it is lined with skin and hairs and is approximately 1 in (2.5 cm) long.

The outer one-third portion of the canal is lined with a membrane containing ceruminous (ear wax producing) cells, and hair cells. The purpose of the cerumen and hairs is to protect the eardrum (which lies at the end of the canal) by trapping dirt and foreign bodies and keeping The anatomy of the human ear. the canal moist. In most individuals, cleaning of the external auditory canal (with Q-tips for example) is not needed. The inner two-thirds of the external auditory canal contains no glands or hair cells.

The human tympanic membrane or eardrum is a thin, concave membrane stretched across the inner end of the external auditory canal much like the skin covering the top of a drum. The eardrum marks the border between the outer ear and middle ear. The eardrum serves as a transmitter of sound by vibrating in response to sounds traveling down the external auditory canal, and beginning sound conduction in the middle ear.

In the adult human, the tympanic membrane has a total area of approximately 63 sq mm, and consists of three layers which contribute to the membrane's ability to vibrate while maintaining a protective thickness. The middle point of the tympanic membrane (the umbo) is attached to the stirrup, the first of three bones contained within the middle ear.

The middle ear transmits sound from the outer ear to the inner ear. The middle ear consists of an oval, air-filled space approximately 2 cubic cm in volume. The middle ear can be thought of as a room, the outer wall of which contains the tympanic membrane. The back wall, separating the middle ear from the inner ear, has two windows, the oval window and the round window. There is a long hallway leading away from the side wall of the room, known as the eustachian tube. The brain lies above the room and the jugular vein lies below. The middle ear is lined entirely with mucous membrane (similar to the nose) and is surrounded by the bones of the skull.

Three tiny bones (the ossicles) in the middle ear form a chain which conducts sound waves from the tympanic membrane (outer ear) to the oval window (inner ear). The three bones are the hammer (malleus), the anvil (incus), and the stirrup (stapes). These bones are connected and move as a link chain might, causing pressure at the oval window and the transmission of energy from the middle ear to the inner ear. Sound waves cause the tympanic membrane to vibrate, which sets up vibrations in the ossicles, which amplify the sounds and transmits them to the inner ear via the oval windows.

In addition to bones, the middle ear houses the two muscles, the stapedius and the tensor tympani, which respond reflexively, that is, without conscious control.

The inner ear is responsible for interpreting and transmitting sound (auditory) sensations and balance (vestibular) sensations to the brain. The inner ear is small (about the size of a pea) and complex in shape, where its series of winding interconnected chambers, has been compared to (and called) a labyrinth. The main components of the inner ear are the vestibule, semicircular canals, and the cochlea.

The vestibule, a round open space which accesses various passageways, is the central structure within the inner ear. The outer wall of the vestibule contains the oval and round windows (which are the connection sites between the middle and inner ear). Internally, the vestibule contains two membranous sacs, the utricle and the saccule, which are lined with tiny hair cells and attached to nerve fibers, and serve as the vestibular (balance/equilibrium) sense organs.

The cochlea is the site of the sense organs for hearing. The cochlea consists of a bony, snail-like shell that contains three separate fluid-filled ducts or canals. The upper canal, the scala vestibuli, begins at the oval window, while the lower canal, the scala tympani, begins at the round window. Between the two canals lies the third canal, the scala media. The scala media is separated from the scala vestibuli by Reissner's membrane and from the scala tympani by the basilar membrane. The scala media contains the organ of Corti, (named after the nineteenth century anatomist who first described it). The organ of Corti lies along the entire length of the basilar membrane. The organ contains hair cells and is the site of the conversion of sound waves into nerve impulses, which are sent to the brain, for auditory interpretation along cranial nerve VIII, also known as the auditory nerve.

—Also called pinna or external ear, is the flap-like organ on either side of the head.

—Also known as ear wax, is an oily, fatty fluid secreted from glands within the external auditory canal.

—A snail-shaped structure in the inner ear which contains the anatomical structures responsible for hearing.

—A passageway leading from the middle ear to the nasopharynx or throat.

—Also called a meatus, is the tunnel or passageway which begins from the external ear and extends inward towards the eardrum.

—A structure located in the scala media of the cochlea, contains hair cells responsible for hearing.

—A muscle located in the middle ear which reflexively contracts in response to loud sounds.

—Also known as the eardrum, is a thin membrane located at the end of the external auditory canal, separates the outer ear from the middle ear.

—System within the body that is responsible for balance and equilibrium.