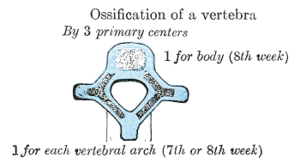 Intramembranous ossification is the transformation of the mesenchyme, cells of an embryo into bone. During early development of vertebrate animals, the embryo consists of three primary cell layers: ectoderm on the outside, mesoderm in the middle, and endoderm on the inside. Mesenchyme cells constitute part of the embryo's mesoderm and develop into connective tissue such as bone and blood. The bones of the skull derive directly from mesenchyme cells by intramembranous ossification.

Endochondral ossification is the gradual replacement of cartilage by bone during development. This process is responsible for formation of most of the skeleton of vertebrate animals. In this process, actively dividing bone-forming cells (osteoblasts) arise in regions of cartilage called ossification centers. The osteoblasts then develop into osteocytes, which are mature bone cells embedded in the calcified (hardened) part of the bone known as the matrix.

Most bones arise from a combination of intramembranous and endochondral ossification. In this process, mesenchyme cells develop into chondroblasts and increase in number by cell division. Then, the chrondroblasts enlarge and excrete a matrix which hardens due to presence of inorganic minerals. Then, chambers form within the matrix and osteoblasts and blood-forming cells enter these chambers. The osteoblasts then secrete minerals to form the bone matrix.

Mature hardened bone is living tissue consisting of an organic component and a mineral component. The organic part mainly consists of proteins such as collagen fibers, an extracellular matrix, and fibroblasts, which have the living cells that produce the collagen and matrix. The mineral part of bone, which is made of hydroxyapatite and calcium carbonate, and gives bones their strength and rigidity. During the life of an individual, osteoblasts continually secrete minerals while osteoclasts continually reabsorb the minerals. Bedridden hospital patients and astronauts often show loss of bone because reabsorption by osteoclasts exceeds synthesis by osteoblasts. Bones become more brittle as a person ages because the mineral part of the bones decreases.