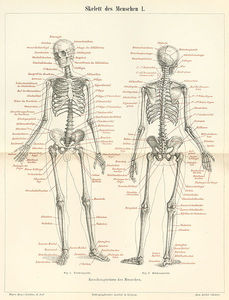 A skeleton is a sturdy framework of about 206 bones that protects the body's organs, supports the body, provides attachment points for muscles to enable body movement, functions as a storage site for minerals such as calcium and phosphorus, and produces blood cells.

The skeletal system is a living, dynamic system, with networks of infiltrating blood vessels. Living mature bone is about 60% calcium compounds and about 40% collagen. Hence, bone is strong, hard and slightly elastic. All humans were born with over 300 bones but some bones, such as those in the skull and lower spine, fuse during growth, thereby reducing the number. Although mature bones consist largely of calcium, most bones in the skeleton of vertebrates, including humans, began as cartilage. Some animals, such as sharks and sting rays, retain their cartilaginous skeleton in adulthood. Cartilage is a type of connective tissue, and contains collagen and elastin fibers.

Individual bones meet at areas called joints and are held in place by connective tissue. Most joints, such as the elbow, are called synovial joints, for the synovial membrane which envelopes the joint and secretes a lubricating fluid. Cartilage lines the surface of many joints and helps reduce friction between bones. The connective tissues linking the skeleton together at the joints are tendons and ligaments. Ligaments and tendons are both made up of collagen, but serve different functions. Ligaments link bones together and help prevent dislocated joints. Tendons link bone to muscle.

Because the bones making up the human skeleton are inside the body, the skeleton is called an endoskeleton. Some animals, such as the crab, have an external skeleton called an exoskeleton.