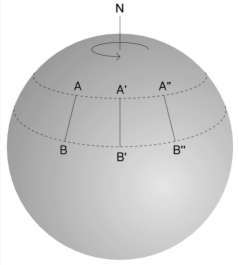 All objects in the universe and our solar system move in space. The earth moves in two ways. It rotates like a top on its axis, an imaginary line through the north and south poles, and revolves in an orbit around the Sun. Centrifugal force results from the earth's rotation; without gravity, centrifugal force could cause objects to fly into space. Because the force of the earth's gravity is 289 times stronger than its centrifugal force, gravity prevents objects from leaving the surface. Centrifugal force causes the earth to bulge at the equator, making it slightly ovoid in shape.

The earth's counterclockwise rotation is in the opposite direction of the apparent movement of heavenly bodies. Thus, although the Sun and stars appear to move from east to west, the earth rotates from west to east.

The rotation of Earth can be proven in several ways. One is the Foucault experiment. This was first conducted in 1851, by the Frenchman Léon Foucault. He suspended a heavy iron ball from a 200 ft (61 m) wire, creating a pendulum, from the dome of the Pantheon in Paris. He put sand underneath the pendulum, and placed a pin on the bottom of the ball, so it would leave a mark on its swing from side to side. On each swing, over the course of 24 hours, the mark in the sand would move to the right. The direction in the path showed movement of the earth against the swing of the pendulum.

A more modern proof of the rotation is shown by the orbits of artificial satellites. A satellite is launched from the Kennedy Space Center at a 30 degree angle to an orbit 100 mi (161 km) above Earth. Its orbit stays at approximately the same plane in space. If Earth did not rotate, the satellite would pass over Cape Canaveral each time it completed an orbit, but it does not. As it completes the first orbit, it flies over Alabama and over Louisiana on the third. Each time the satellite passes over locations in the United States, it is 1,000 mi (1,609 km) farther to the west. Tracking stations have made this observation with hundreds of satellites.

Generally when we speak of Earth's rotation, we are talking about the rotation of Earth's surface. This rotation is used to define time. Since people began to measure time, it's been done by the movement of Sun and stars. One rotation of Earth makes up one 24 hour day. This is in contrast to the time of revolution around the Sun of 365 days, or one year. Because the earth's axis is not perpendicular to the equator, but leans at a 23.5° angle, the amount of daylight varies over the course of a year.

Over time the speed of Earth's rotation has slowed. Knowing how fast it spins, at any given time, is important to navigators and pilots in finding locations.