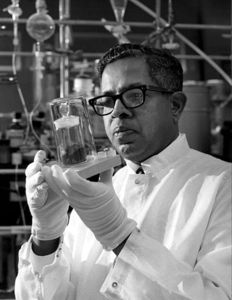 Chemical evolution describes chemical changes on the primitive Earth that gave rise to the first forms of life. The first living things on Earth were prokaryotes with a type of cell similar to present-day bacteria. Prokaryote fossils have been found in 3.4-million-year-old rock in the southern part of Africa, and in even older rocks in Australia, including some that appear to be photosynthetic. All forms of life are theorized to have evolved from the original prokaryotes, probably 3.5-4.0 billion years ago.

The chemical and physical conditions of the primitive Earth are invoked to explain the origin of life, which was preceded by chemical evolution of organic chemicals. Astronomers believe that 20-30 billion years ago, all matter was concentrated in a single mass, and that it blew apart with a "big bang." In time, a disk-shaped cloud of dust condensed and formed the Sun, and the peripheral matter formed its planets. Heat produced by compaction, radiation, and impacting meteorites melted Earth. Then, as the planet cooled, Earth's layers formed. The first atmosphere was made up of hot hydrogen gas, too light to be held by Earth's gravity. Water vapor, carbon monoxide, carbon dioxide, nitrogen, and methane replaced the hydrogen atmosphere. As Earth cooled, water vapor condensed and torrential rains filled up its basins, thereby forming the seas. Also present were lightning, volcanic activity, and ultraviolet radiation. It was in this setting that life began.

According to one theory, chemical evolution occurred in four stages.

In the first stage of chemical evolution, molecules in the primitive environment formed simple organic substances, such as amino acids. This concept was first proposed in 1936 in a book entitled, "The Origin of Life on Earth," written by the Russian scientist, Aleksandr Ivanovich Oparin. He considered hydrogen, ammonia, water vapor, and methane to be components in the early atmosphere. Oxygen was lacking in this chemically-reducing environment. He stated that ultraviolet radiation from the Sun provided the energy for the transformation of these substances into organic molecules. Scientists today state that such spontaneous synthesis occurred only in the primitive environment. Abiogenesis became impossible when photosynthetic cells added oxygen to the atmosphere. The oxygen in the atmosphere gave rise to the ozone layer which then shielded Earth from ultraviolet radiation. Newer versions of this hypothesis contend that the primitive atmosphere also contained carbon monoxide, carbon dioxide, nitrogen, hydrogen sulfide, and hydrogen. Present-day volcanoes emit these substances.

In 1957, Stanley Miller and Harold Urey provided laboratory evidence that chemical evolution as described by Oparin could have occurred. Miller and Urey created an apparatus that simulated the primitive environment. They used a warmed flask of water for the ocean, and an atmosphere of water, hydrogen, ammonia and methane. Sparks discharged into the artificial atmosphere represented lightning. A condenser cooled the atmosphere, causing rain that returned water and dissolved compounds back to the simulated sea. When Miller and Urey analyzed the components of the solution after a week, they found various organic compounds had formed. These included some of the amino acids that compose the proteins of living things. Their results gave credence to the idea that simple substances in the warm primordial seas gave rise to the chemical building blocks of organisms.

In the second stage of chemical evolution, the simple organic molecules (such as amino acids) that formed and accumulated joined together into larger structures (such as proteins). The units linked to each other by the process of dehydration synthesis to form polymers. The problem is that the abiotic synthesis of polymers had to occur without the assistance of enzymes. In addition, these reactions give off water and would, therefore, not occur spontaneously in a watery environment. Sydney Fox of the University of Miami suggested that waves or rain in the primitive environment splashed organic monomers on fresh lava or hot rocks, which would have allowed polymers to form abiotically. When he tried to do this in his laboratory, Fox produced proteinoids—abiotically synthesized polypeptides.

The next step in chemical evolution suggests that polymers interacted with each other and organized into aggregates, known as protobionts. Protobionts are not capable of reproducing, but had other properties of living things. Scientists have successfully produced protobionts from organic molecules in the laboratory. In one study, proteinoids mixed with cool water assembled into droplets or microspheres that developed membranes on their surfaces. These are protobionts, with semipermeable and excitable membranes, similar to those found in cells.

In the final step of chemical evolution, protobionts developed the ability to reproduce and pass genetic information from one generation to the next. Some scientists theorize RNA to be the original hereditary molecule. Short polymers of RNA have been synthesized abiotically in the laboratory. In the 1980s, Thomas Cech and his associates at the University of Colorado at Boulder discovered that RNA molecules can function as enzymes in cells. This implies that RNA molecules could have replicated in prebiotic cells without the use of protein enzymes. Variations of RNA molecules could have been produced by mutations and by errors during replication. Natural selection, operating on the different RNAs would have brought about subsequent evolutionary development. This would have fostered the survival of RNA sequences best suited to environmental parameters, such as temperature and salt concentration. As the protobionts grew and split, their RNA was passed on to offspring. In time, a diversity of prokaryote cells came into existence. Under the influence of natural selection, the prokaryotes could have given rise to the vast variety of life on Earth.

—This refers to organisms that can synthesize their biochemical constituents using inorganic precursors and an external source of energy.

—Organism that requires food from the environment since it is unable to synthesize nutrients from inorganic raw materials.

—Type of cell that lacks a membraneenclosed nucleus. Found solely in bacteria.