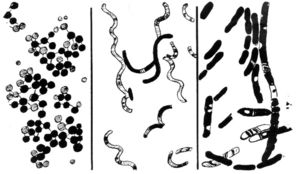 Although all bacteria share certain structural, genetic, and metabolic characteristics, important biochemical differences exist among the many species of bacteria. These differences permit bacteria to live in many different, and sometimes extreme, environments. For example, some bacteria recycle nitrogen and carbon from decaying organic matter, then release these gases into the atmosphere to be reused by other living things. Other bacteria cause diseases in humans and animals, help digest sewage in treatment plants, or produce the alcohol in wine, beer and liquors. Still others are used by humans to break down toxic waste chemicals in the environment, a process called bioremediation.

The cytoplasm of all bacteria is enclosed within a cell membrane surrounded by a rigid cell wall whose polymers, with few exceptions, include peptidoglycans—large, structural molecules made of protein carbohydrate.

Bacteria also secrete a viscous, gelatinous polymer (called the glycocalyx) on their cell surfaces. This polymer, composed either of polysaccharide, polypeptide, or both, is called a capsule when it occurs as an organized layer firmly attached to the cell wall. Capsules increase the disease-causing ability (virulence) of bacteria by inhibiting immune system cells called phagocytes from engulfing them. One such bacterium, Streptococcus pneumoniae, is the cause of pneumonia.

The shape of bacterial cells are classified as spherical (coccus), rodlike (bacillus), spiral (spirochete), helical (spirilla) and comma-shaped (vibrio) cells. Many bacilli and vibrio bacteria have whiplike appendages (called flagella) protruding from the cell surface. Flagella are composed of tight, helical rotors made of chains of globular protein called flagellin, and act as tiny propellers, making the bacteria very mobile.

Flagella may be arranged in any of four ways, depending on the species of bacteria. There is the monotrichous condition (single flagellum at one end), the amphitrichous (single flagellum at each end of the bacterium), the lophotrichous (two or more flagella at either or both ends of the bacterium), and the peritrichous condition (flagella distributed over the entire cell).

Spirochetes are spiral-shaped bacteria that live in contaminated water, sewage, soil and decaying organic matter, as well as inside humans and animals. Spirochetes move by means of axial filaments, which consist of bundles of fibrils arising at each end of the cell beneath an outer sheath. The fibrils, which spiral around the cell, rotate, causing an opposite movement of the outer sheath that propels the spirochetes forward, like a turning corkscrew. The best known spirochete is Treponema pallidum, the organism that causes syphilis.

On the surface of some bacteria are short, hairlike, proteinaceous projections that may arise at the ends of the cell or over the entire surface. These projections, called fimbriae, let the bacteria adhere to surfaces. For example, fimbriae on the bacterium Neisseria gonorrhoea, which causes gonorrhea, allow these organisms to attach to mucous membranes.

Other proteinaceous projections, called pili, occur singly or in pairs, and join pairs of bacteria together, facilitating transfer of DNA between them.

During periods of harsh environmental conditions some bacteria, such as those of the genera Clostridium and Bacillus, produce within themselves a dehydrated, thick-walled endospore. These endospores can survive extreme temperatures, dryness, and exposure to many toxic chemicals and to radiation. Endospores can remain dormant for long periods (hundreds of years in some cases) before being reactivated by the return of favorable conditions.

A primitive form of exchange of genetic material between bacteria involving plasmids does occur. Plasmids are small, circular, extrachromosomal DNA molecules that are capable of replication and are known to be capable of transferring genes among bacteria. For example, resistance plasmids carry genes for resistance to antibiotics from one bacterium to another, while other plasmids carry genes that confer pathogenicity. In addition, the transfer of genes via bacteriophages—viruses that specifically parasitize bacteria—also serves as a means of genetic recombination. Corynebacterium diphtheriae, for example, produces the diphtheria toxin only when infected by a phage that carries the diphtherotoxin gene.

The above examples of genetic information exchange between bacterial cells occurs regularly in nature. This natural exchange, or lateral gene transfer, can be mimicked artificially in the laboratory. Bioengineering uses sophisticated techniques to purposely transfer DNA from one organism to another in order to give the second organism some new characteristic it did not have previously. For example, in a process called transformation, antibiotic susceptible bacteria that are induced to absorb manipulated plasmids placed in their environment, can acquire resistance to that antibiotic substance due to the new genes they have incorporated. Similarly, in a process called transfection, specially constructed viruses are used to artificially inject bioengineered DNA into bacteria, giving infected cells some new characteristic.

Bacteria synthesize special DNA-cutting enzymes (known as restriction enzymes) that destroy the DNA of phages that do not normally infect them. Purified restriction enzymes are used in the laboratory to slice pieces of DNA from one organism and insert them into the genetic material of another organism as mentioned above.