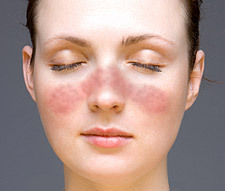 Other autoimmune disorders are more general, and involve multiple sites in the body. One example is rheumatoid arthritis.

Each autoimmune disorder occurs rarely. However, when all the disorders are tallied together, autoimmunity is found to be a disorder that affects millions of people in the United States alone.

The causes of autoimmune disease are not clearly known. However, there are indications that some disorders, or at least the potential to develop the disorder, can be genetically passed on from one generation to the next. Psoriasis is one such example. The environment also has an influence. The way the immune system responds to environmental factors and to infections (e.g., those caused by some viruses) can trigger the development of a disorder. Other factors, which are less understood, include aging, hormones, physiological changes during pregnancy, and chronic stress.

In systemic lupus erythematosus (often known as LUPUS), antibodies attack a number of the body's own different tissues. The disease recurs periodically and is seen mainly in young and middle-aged women. Symptoms include fever, chills, fatigue, weight loss, skin rashes (particularly the classic "butterfly" rash on the face), vasculitis, joint pain, patchy hair loss, sores in the mouth or nose, lymph-node enlargement, gastric problems, and, in women, irregular menstrual periods. About half of those who suffer from lupus develop cardiopulmonary problems, and some may also develop urinary problems. Lupus can also affect the central nervous system, causing seizures, depression, and psychosis.

Rheumatoid arthritis occurs when the immune system attacks and destroys the tissues that line bone joints and cartilage. The disorder occurs throughout the body, although some joints may be more affected than others. Initially, the disorder is characterized by a low-grade fever, loss of appetite, weight loss, and a generalized pain in the joints. The joint pain then becomes more specific, usually beginning in the fingers then spreading to other areas (i.e., wrists, elbows, knees, ankles). As the disease progresses, joint function diminishes sharply and deformities occur. A particularly distinctive feature is the "swan's neck" curling of the fingers.

This disorder, which affects connective tissue, is also called CREST syndrome or progressive systemic sclerosis. Symptoms include pain, swelling, and stiffness of the joints. As well, the skin takes on a tight, shiny appearance. The digestive system becomes involved, resulting in weight loss, appetite loss, diarrhea, constipation, and distention of the abdomen. As the disease progresses, the heart, lungs, and kidneys become involved, and malignant hypertension causes death in approximately 30% of cases.

Goodpasture's syndrome occurs when antibodies are deposited in the membranes of both the lung and kidneys, causing both inflammation of kidney glomerulus (glomerulonephritis) and lung bleeding. It is typically a disease of young males. Symptoms are similar to that of iron deficiency anemia, including fatigue and pallor. Symptoms involving the lungs may range from a cough that produces bloody sputum to outright hemorrhaging. Symptoms involving the urinary system include blood in the urine and/or swelling.

These immune disorders affect the neuromuscular system. In polymyositis, symptoms include muscle weakness, particularly in the shoulders or pelvis that prevents the patient from performing everyday activities. In dermatomyositis, this muscle weakness is accompanied by a rash that appears on the upper body, arms, fingertips, and sometimes on the eyelids.

Immune-system-induced degeneration of the joints and soft tissue of the spine is the hallmarks of ankylosing spondylitis. The disease generally begins with lower back pain that progresses up the spine. The pain may eventually become crippling.

Exocrine glands are attacked, resulting in excessive dryness of the mouth and eyes.

This disorder is considered to be caused by an antibody that attacks and destroys the insulin-producing islet cells of the pancreas. Type I diabetes mellitus is characterized by fatigue and an abnormally high level of glucose in the blood (a condition called hyperglycemia).

The disorder is caused by an antibody that binds to specific cells in the thyroid gland, causing them to make excessive amounts of thyroid hormone. This disease is characterized by an enlarged thyroid gland, weight loss without loss of appetite, sweating, heart palpitations, nervousness, and an inability to tolerate heat.

An antibody that binds to cells in the thyroid gland causes the disorder known as Hashimoto's thyroiditis. This disorder generally displays no symptoms, but patients can exhibit weight gain, fatigue, dry skin, and hair loss. Unlike Grave's disease, however, less thyroid hormone is made.

Pernicious anemia is a disorder in which the immune system attacks the lining of the stomach, destroying the ability to utilize vitamin B12. Signs of pernicious anemia include weakness, sore tongue, bleeding gums, and tingling in the extremities. Because the disease causes a decrease in stomach acid, nausea, vomiting, loss of appetite, weight loss, diarrhea, and constipation are possible. Also, because Vitamin B 12 is essential for the nervous system function, the deficiency of it brought on by the disease can result in a host of neurological problems, including weakness, lack of coordination, blurred vision, loss of fine motor skills, loss of the sense of taste, ringing in the ears, and loss of bladder control.

In this disorder, the immune system targets and destroys blood platelets. It is characterized by pinhead-size red dots on the skin, unexplained bruises, bleeding from the nose and gums, and blood in the stool.

Antibodies coat and lead to the destruction of red blood cells in autoimmune hemolytic anemia. Symptoms include fatigue and abdominal tenderness due to an enlarged spleen.

A group of autoimmune disorders in which the immune system attacks and destroys blood vessels can cause vasculitis. The symptoms vary, and depend upon the group of veins affected.

Pemphigus vulgaris involves a group of autoimmune disorders that affect the skin. This disease is characterized by blisters and deep lesions on the skin.

In myasthenia gravis, the immune system attacks a receptor on the surface of muscle cells, preventing the muscle from receiving nerve impulses and resulting in severe muscle weakness. The disease is characterized by fatigue and muscle weakness that at first may be confined to certain muscle groups, but then may progress to the point of paralysis. Patients often have expressionless faces as well as difficulty chewing and swallowing. If the disease progresses to the respiratory system, artificial respiration may be required.

The above are only some of the more than 30 autoimmune disorders.