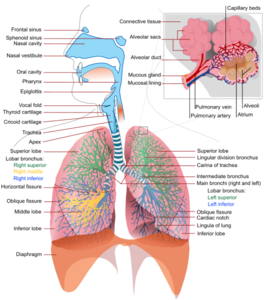 Aerobic organisms take in oxygen from the external environment and release carbon dioxide in a process known as respiration. At the most basic level, this exchange of gases takes place in cells and involves the release of energy from food materials by oxidation. Carbon dioxide is produced as a waste product of these oxidation reactions. The gas exchange in cells is called cellular respiration. In single-celled organisms, the oxygen and carbon dioxide simply diffuse through the cell membrane. Respiration in multicellular organisms, however, is a much more complex process involving a specialized respiratory system that plays an intermediary role between the cells and the external environment. While the respiratory organs of some complex organisms such as insects communicate directly with internal tissues, respiration in vertebrates also involves the circulatory system, which carries gases between cells and respiratory organs.

The earthworm uses its moist outer skin as a respiratory organ. Oxygen diffuses across the body surface and enters blood in the dense capillary mesh that lies just below the skin. Blood carries the oxygen to the body cells. There, it picks up carbon dioxide and transports it to the skin capillaries where it diffuses out of the body. The skin is effective as an organ of respiration in small wormlike animals where there is a high ratio of surface to volume.