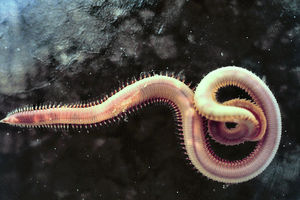 Segmented worms (phylum Annelida) are so named because of their elongated, more or less cylindrical bodies divided by grooves into a series of ringlike segments. Typically, the external grooves correspond to internal partitions called septa, which divide the internal body space into a series of compartments. Perhaps the most familiar examples of segmented worms are the common earthworms or night crawlers, and the freshwater leeches. Actually, the more numerous and typical members of the phylum are marine, crawling or hiding under rocks, or living in burrows, or in tubes, or in the sediment.There are approximately 15,000 living species of annelids, placed in three major classes: the Polychaeta (mostly marine), the Oligochaeta (mostly terrestrial), and the Hirudinea (mostly freshwater).

Polychaetes are either "errant"—moving and feeding actively, or "sedentary"—with a passive lifestyle. The basic body plan of an errant form is illustrated by the sandworm Nereis. The anterior end of Nereis is specialized to form a "head," possessing two pairs of eyes and several pairs of sensory appendages. The remainder of the body consists of a large number (100 or more) of similar segments, each with a pair of distinct lateral appendages called parapodia. The parapodium is muscular, highly mobile, and divided into two lobes, an upper, or dorsal, "notopodium," and a lower, or ventral "neuropodium." Each lobe bears a bundle of bristles, or setae. The setae, made of a substance called chitin, are used in crawling or in swimming. Nereis is a carnivore. Its food consists of small live organisms, or fragments of dead organisms, which it grasps by means of a pair of powerful jaws located at the tip of an eversible muscular pharynx. The food is ground up and digested as it passes through successive parts of the straight, tubular gut. The undigested residue is discarded through the anus located at the posterior end.

Most other body systems are arranged on a "segmental plan," which means that structures performing a particular body function are repeated in each segment. Thus, for excretion each segment contains a pair of coiled, ciliated tubes called nephridia. At one end the nephridial tube opens into the spacious cavity (called coelom) between the body wall and the gut; at the other end it opens to the outside. There is a well developed circulatory system. The blood, which is red in color due to the presence of hemoglobin, circulates in blood vessels. Gas exchange occurs between blood and sea water across the thin, leaf-like lobes of the parapodia.

Each body segment also has a pair of nerve ganglia and three or four pairs of nerves for receiving sensory input and coordinating muscular activity. Ganglia in successive segments are connected by means of a pair of longitudinal nerve cords, so that nerve impulses can be transmitted back and forth between each segment and the "cerebral ganglion" or "brain" located in the head. Sexes are separate, although no external characteristics distinguish males from females.

There are no permanent testes or ovaries; rather, sperm and eggs develop from the lining of the body cavity during the breeding season (early spring), and fill the coelomic space. They are released into the surrounding water by rupture of the body wall. Fertilization is external. Many errant polychaetes, including Nereis, congregate in ocean waters in enormous numbers in order to spawn. The fertilized egg (zygote) develops into a ciliated, planktonic larva called the trochophore, which gradually transforms into a segmented juvenile. The worm grows in length by adding new segments at the posterior end. Even after attaining the adult stage, many polychaetes are able to regenerate body segments, especially toward the posterior end, if segments are lost because of attacks by predators, or if they break off to release gametes. Polychaetes vary in length from a few cm to over 1.6 ft (0.5 m). Most are between 5.9 to 9.9 in (15 and 25 cm) long.

Sedentary polychaetes live in burrows which they excavate in sand or mud; or in tubes which they construct from body secretions, or sand grains, or mud, or a combination of these. Arenicola (lugworm), Chaetopterus (parchment worm), Clymenella (bamboo worm), and Sabella (fanworm) are among the well known examples of sedentary forms. Sedentary worms lack eyes and sensory appendages, although some of them have respiratory appendages and feeding tentacles. Their parapodia and setae are either greatly reduced or highly specialized. Sedentary polychaetes feed passively; in passive feeding, food particles are drawn toward the mouth by ciliated tentacles, or are trapped in mucus which is then conveyed to the mouth.

Oligochaetes, for example the earthworm Lumbricus, commonly live in burrows in the soil, although a few genera (for example Tubifex, Stylaria, Aeolosoma) occur in freshwater. Earthworms and other oligochaetes differ from the typical polychaete in lacking sensory appendages and parapodia; in possessing fewer setae; in being hermaphroditic, having permanent gonads, and requiring internal fertilization; in depositing eggs in small capsules called cocoons; and in not having a larval stage. The material forming the cocoon is secreted from a specialized area of the body called the clitellum. Like polychaetes, oligochaetes have well developed powers of regeneration. Freshwater oligochaetes are typically microscopic in size; earthworms commonly attain a length of 11.8 in (30 cm) or more. The giant earthworm of Australia (genus Megascolides) measures more than 9.8 ft (3 m).

The class Hirudinea comprises leeches, which are mostly blood-sucking parasites of aquatic vertebrates; some leeches are predators.The vast majority of leeches live in freshwater habitats such as ponds and lakes, while a few are semi-terrestrial and some are marine. A leech has a relatively small and fixed number (30-35) of body segments, although its body has a large number of superficial groove-like markings giving it the appearance of more extensive segmentation. With the exception of one small group, setae are absent. Eyes are usually present, but there are no sensory appendages or parapodia. The mouth is located in the middle of an anterior sucker. A posterior sucker is present at the opposite end. The suckers are used for attachment to the substrate during the characteristic looping movements, and for attachment to the host during feeding. Blood-sucking leeches secrete saliva containing an anti-coagulant. The stomach of the blood-sucking leech has many paired, sac-like extensions for storing the blood. Digestion of the blood proceeds very slowly. A bloodsucking leech needs to feed only occasionally, and can go for long periods between meals. Predatory leeches feed on aquatic invertebrates such as snails, worms, and insect larvae. Like oligochaetes, leeches are hermaphroditic, and have permanent gonads, internal fertilization, and a clitellum. The smallest leeches are only about 0.2 in (5 mm) long; the largest reach 17.7 in (45 cm) when fully extended. Among the common North American genera of freshwater leeches are Glossiphonia, Haemopis, Macrobdella, and Placobdella. The medicinal leech, Hirudo medicinalis, is native to Europe.

Annelids are of great ecological significance in marine and terrestrial habitats. Polychaetes, and especially their larvae, constitute important links in food chains in the ocean. Earthworms play an important role in natural turning over of soil. Medicinal leeches have been used for bloodletting for centuries, and even now they are in demand as a source of the anticoagulant hirudin. Leeches are also important in scientific research, especially in trying to understand the complexities of the nervous system.

—Polysaccharide that forms the exoskeleton of insects, crustaceans, and other invertebrates.

—A collection of nerve cell bodies forming a discrete unit.

—A collective term for organisms that live suspended in the water column in large bodies of water.

—A stiff bristle made of chitin, projecting from the skin, in annelids and some other invertebrates.

—Topshaped, microscopic, ciliated larva found in annelids and some other invertebrate groups.