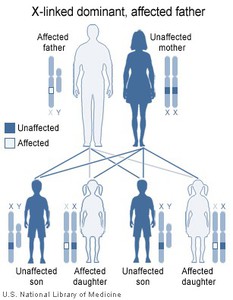 Heredity plays a part in almost all diseases. Recent advances in gene research have allowed a steadily increasing number of specific genes and genetic factors to be linked to a wide variety of medical complaints. There are currently approximately 6,000 known genetic diseases. Those that result from simple mutations of single genes are often referred to as hereditary diseases, and they exhibit distinctive patterns of inheritance in families.

Inherited diseases result primarily or exclusively from genetic mutations or genetic imbalance passed on from parent to child at conception. These include Mendelian genetic conditions as well as chromosomal abnormalities. A third group of disorders exists wherein both the environment and genetic factors interact to produce—or influence the course of—a disease. These conditions are often referred to as having multifactorial or complex inheritance patterns.

Normally there are two working copies of every gene in each individual. In the case of a dominant genetic disease, one copy of the gene is altered by mutation and causes the disease even though the other gene copy is normal. In autosomal dominant genetic diseases, a parent who shows the trait will pass the mutation on to half of his/her children with an equal chance for sons and daughters to be affected. Children who do not have the trait will generally not pass the disease on to their children. This is sometimes referred to as vertical transmission because it can be observed in each generation, usually without skipping a generation. Examples of autosomal dominant diseases include achondroplasia (a form of dwarfism), neurofibromatosis, and Huntington disease.

In autosomal recessive diseases, both parents must be carriers (i.e., they are clinically normal but have one mutation of a particular gene), and both must pass the mutation to a child in order for that child to be affected. This inheritance pattern is distinctive in that the parents and other relatives of the person with the disease appear to be completely normal, while 25% of their brothers and sisters will share the same disease. This is sometimes called horizontal transmission because there is no expression seen in previous generations by the ancestors and relatives who carry the mutation. Rather, the mutation travels unobserved (silently) within the family and is expressed by siblings in a single generation. Examples of autosomal recessive disease include sickle cell anemia, cystic fibrosis, Tay-Sachs disease, and phenylketonuria.

When diseases can be attributed to genes on a sex chromosome, either the X or the Y, they are characterized as sex-linked diseases. Human males carry one X and one Y chromosome, and human females carry two X chromosomes.

For example, X-linked recessive diseases are caused by genes on the X chromosome. Because males have only one X chromosome, they tend to express all mutations on the X chromosome they inherit from their mother. Daughters receive an X chromosome from each parent, and they, therefore, have a second copy of each gene that usually compensates for any recessive mutations they might inherit. For this reason, the great majority of patients with X-linked recessive diseases (XLR diseases) are male. The inheritance pattern is characterized by clusters of affected males who are related through apparently healthy female relatives. Examples of XLR diseases include hemophilia (types A and B) and Duchenne muscular dystrophy.

When there is interaction between genetic and non-genetic factors, resulting diseases are termed multifactorial, or polygenic disorders. The inheritance patterns can be quite complex. Most chronic illnesses in humans are multifactorial hereditary disorders. Examples include heart disease, diabetes, stroke, hypertension, cancer, and most forms of mental illness.

Some inherited diseases are attributed to damaged or improperly distributed chromosomes and are termed chromosomal diseases. Chromosomes are long strands of DNA complexed with proteins and RNA that condense and allow for equal distribution of the genes when cells divide. Each chromosome contains hundreds or thousands of genes, and every cell needs to have two copies of each chromosome in order to maintain genetic balance. At the time of conception, an extra copy or missing copy of a chromosome or even a part of a chromosome disrupts normal development. Most chromosomal abnormalities result from simple accidents of chromosome segregation and, as such, they tend not to recur in families. One example of genetic disorder that results from chromosomal imbalance is Down syndrome. This condition is caused by the presence of an extra copy of chromosome 21.

—Long strands of DNA complexed with proteins, which contain the genetic information. At the time of conception, an extra, missing, or damaged copy of a chromosome or even a part of a chromosome disrupts normal development.