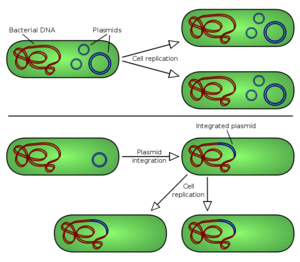 Examples of episomes include insertion sequences and transposons. Viruses are another example of an episome. Viruses that integrate their genetic material into the host chromosome enable the viral nucleic acid to be produced along with the host genetic material in a nondestructive manner. As an autonomous unit (i.e., existing outside of the chromosome) however, the viral episome destroys the host cell as it commandeers the host's replication apparatuses to make new copies of itself.

Another example of an episome is called the F factor. The F factor determines whether genetic material in the chromosome of one organism is transferred into another organism. The F factor can exist in three states that are designated as FPLUS, Hfr, and F prime.

An episome is distinguished from other pieces of DNA that are independent of the chromosome (i.e.,plasmids) by their large size.

Plasmids are different from episomes, as plasmid DNA cannot link up with chromosomal DNA. The plasmid carries all the information necessary for its independent replication. While not necessary for bacterial survival, plasmids can be advantageous to a bacterium. For example, plasmids can carry genes that confer resistance to antibiotics or toxic metals, genes that allow the bacterium to degrade compounds that it otherwise could not use as food, and even genes that allow the bacterium to infect an animal or plant cell. Such traits can be passed on to another bacterium.

Transposons and insertion sequences are episomes. These are also known as mobile genetic elements. They are capable of existing outside of the chromosome. They are also designed to integrate into the chromosome following their movement from one cell to another. Like plasmids, transposons can carry other genetic material with them, and so pass on resistance to the cells they enter. Class 1 transposons, for example, contain drug resistance genes. Insertion sequences do not carry extra genetic material. They code for only the functions involved in their insertion into chromosomal DNA.

Transposons and insertion sequences are useful tools to generate changes in the DNA sequence of host cells. These genetic changes that result from the integration and the exit of the mobile elements from DNA, are generically referred to as mutations. Analysis of the mobile element can determine what host DNA is present, and the analysis of the mutated host cell can determine whether the extra or missing DNA is important for the functioning of the cell.