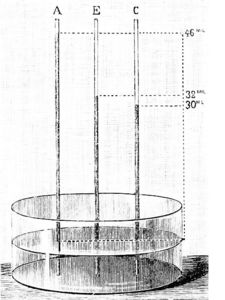 The combination of the adhesive forces and the surface tension that arises from cohesion produces the characteristic upward curve in a wetting fluid. Capillarity is the result of cohesion of water molecules and adhesion of those molecules to the solid material forming the void. As the edges of the container are brought closer together, such as in a very narrow tube, the interaction of these phenomena causes the liquid to be drawn upward in the tube. The more narrow the tube, the greater the rise of the liquid. Greater surface tension and increased ratio of adhesion to cohesion also result in greater rise. However, increased density of the liquid will cause it to rise to a lesser degree.

The force with which water is held by capillary action varies with the quantity of water being held. Water entering a natural void, such as a pore within the soil, forms a film on the surface of the material surrounding the pore. The adhesion of the water molecules nearest the solid material is greatest. As water is added to the pore, the thickness of the film increases, the capillary force is reduced in magnitude, and water molecules on the outer portion of the film may begin to flow under the influence of gravity. As more water enters the pore the capillary force is reduced to zero when the pore is saturated. The movement of groundwater through the soil zone is controlled, in part, by capillary action. The transport of fluids within plants is also an example of capillary action. As the plant releases water from its leaves, water is drawn upward from the roots to replace it.