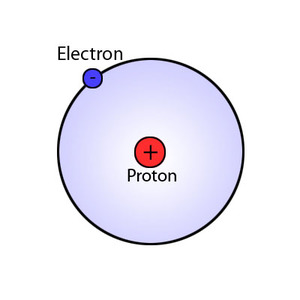 The Bohr model of atomic structure was developed by Danish physicist and Nobel laureate Niels Bohr (1885–1962). Published in 1913, Bohr's model improved the classical atomic models of physicists J. J. Thomson and Ernest Rutherford by incorporating quantum theory. While working on his doctoral dissertation at Copenhagen University, Bohr studied physicist Max Planck's quantum theory of radiation. After graduation, Bohr worked in England with Thomson and subsequently with Rutherford. During this time Bohr developed his model of atomic structure.

Before Bohr, the classical model of the atom was similar to the Copernican model of the solar system where, just as planets orbit the Sun, electrically negative electrons moved in orbits about a relatively massive, positively charged nucleus. The classical model of the atom allowed electrons to orbit at any distance from the nucleus. This predicted that when, for example, a hydrogen atom was heated, it should produce a continuous spectrum of colors as it cooled because its electron, moved away from the nucleus by the heat energy, would gradually give up that energy as it spiraled back closer to the nucleus. Spectroscopic experiments, however, showed that hydrogen atoms produced only certain colors when heated. In addition, physicist James Clark Maxwell's influential studies on electromagnetic radiation (light) predicted that an electron orbiting around the nucleus according to Newton's laws would continuously lose energy and eventually fall into the nucleus. To account for the observed properties of hydrogen, Bohr proposed that electrons existed only in certain orbits and that, instead of traveling between orbits, electrons made instantaneous quantum leaps or jumps between allowed orbits.

In the Bohr model, the most stable, lowest energy level is found in the innermost orbit. This first orbital forms a shell around the nucleus and is assigned a principal quantum number (n) of n=1. Additional orbital shells are assigned values n=2, n=3, n=4, etc. The orbital shells are not spaced at equal distances from the nucleus, and the radius of each shell increases rapidly as the square of n. Increasing numbers of electrons can fit into these orbital shells according to the formula 2n2. The first shell can hold up to two electrons, the second shell (n=2) up to eight electrons, and the third shell (n=3) up to 18 electrons. Subshells or suborbitals (designated s,p,d, and f) with differing shapes and orientations allow each element a unique electron configuration.

As electrons move farther away from the nucleus, they gain potential energy and become less stable. Atoms with electrons in their lowest energy orbits are in a "ground" state, and those with electrons jumped to higher energy orbits are in an "excited" state. Atoms may acquire energy that excites electrons by random thermal collisions, collisions with subatomic particles, or by absorbing a photon. Of all the photons (quantum packets of light energy) that an atom can absorb, only those having an energy equal to the energy difference between allowed electron orbits will be absorbed. Atoms give up excess internal energy by giving off photons as electrons return to lower energy (inner) orbits.

The electron quantum leaps between orbits proposed by the Bohr model accounted for Plank's observations that atoms emit or absorb electromagnetic radiation only in certain units called quanta. Bohr's model also explained many important properties of the photoelectric effect described by Albert Einstein.

According to the Bohr model, when an electron is excited by energy it jumps from its ground state to an excited state (i.e., a higher energy orbital). The excited atom can then emit energy only in certain (quantized) amounts as its electrons jump back to lower energy orbits The Bohr model accounted for quantum phenomena by encountered in chemistry and physics by restricting a hydrogen electron's transitions to instantaneous changes between allowed orbits (energy levels). located closer to the nucleus. This excess energy is emitted in quanta of electromagnetic radiation (photons of light) that have exactly same energy as the difference in energy between the orbits jumped by the electron. For hydrogen, when an electron returns to the second orbital (n=2) it emits a photon with energy that corresponds to a particular color or spectral line found in the Balmer series of lines located in the visible portion of the electro-magnetic (light) spectrum. The particular color in the series depends on the higher orbital from which the electron jumped. When the electron returns all the way to the innermost orbital (n=1), the photon emitted has more energy and forms a line in the Lyman series found in the higher energy, ultraviolet portion of the spectrum. When the electron returns to the third quantum shell (n=3), it retains more energy and, therefore, the photon emitted is correspondingly lower in energy and forms a line in the Paschen series found in the lower energy, infrared portion of the spectrum.

Because electrons are moving charged particles, they also generate a magnetic field. Just as an ampere is a unit of electric current, a magneton is a unit of magnetic dipole moment. The orbital magnetic moment for hydrogen atom is called the Bohr magneton.

The Bohr model remains a landmark in scientific thought that poses profound questions for scientists and philosophers. The concept that electrons make quantum leaps from one orbit to another, as opposed to simply moving between orbits, seems counter-intuitive, that is, outside the human experience with nature. Bohr said, "Anyone who is not shocked by quantum theory has not understood it." Like much of quantum theory, the proofs of how nature works at the atomic level are mathematical.