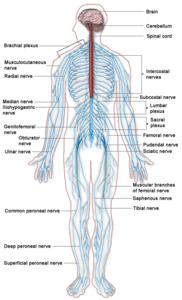 When a stimulus is strong enough, a nerve impulse is generated in an "all or none" response which means that a stimulus strong enough to generate a nerve impulse has been given. The stimulus triggers chemical and electrical changes in the neuron. Before an impulse is received, a resting neuron is polarized with different charges on either side of the cell membrane. The exterior of the cell is positively charged with a larger number of sodium ions present compared to the interior of the cell. The interior of the cell is negatively charged since it contains more potassium ions than the exterior of the cell. As a result of the differences in charges, an electro-chemical difference of about -70 millivolts occurs. The sodium-potassium pump, a system which removes sodium ions from inside the cell and draws potassium ions back in, maintains the electrical balance of the resting cell. Since the cell has to do work to maintain the ion concentration, ATP molecules are used to provide the The human nervous system. necessary energy. Once a nerve impulse is generated, the permeability of the cell membrane changes, sodium ions flow into, and potassium ions flow out of, the cell. The flow of ions causes a reversal in charges, with a positive charge now occurring on the interior of the cell and a negative charge on the exterior. The cell is said to be depolarized, resulting in an action potential causing the nerve impulse to move along the axon. As depolarization of the membrane proceeds along the nerve, a series of reactions start with the opening and closing of ion gates, which allow the potassium ions to flow back into the cell and sodium ions to move out of the cell. The nerve becomes polarized again since the charges are restored. Until a nerve becomes repolarized it cannot respond to a new stimulus; the time for recovery is called the refractory period and takes about 0.0004 of a second. The more intense the stimulus, the more frequent the firing of the neuron. When the impulse reaches the end of the axon, it causes the release of chemicals from small vesicles called neurotransmitters which diffuse across the synaptic gap, the small space between the axon and receptors in the dendrites. There is no physical contact between axons and dendrites (except in electrical transmission, usually found in invertebrates) which takes place through gap junctions.

The type of response by the receiving cell may be excitatory or inhibitory depending upon a number of factors including the type of neurotransmitters involved. All nerve impulses are the same whether they originate from the ear, heart, or stomach. How the impulse is interpreted is the job of the central nervous system. A blow to the head near the optic center of the brain produces the same results as though the impulse had originated in the eyes. The neurons are the functional units of the nervous system through which coordination and control in organisms is executed.

Carey, Joseph, ed. Brain Facts: A Primer on the Brain and the Nervous System. Washington, DC: Society for Neuroscience, 1993.

—A transient change in the electrical potential across a membrane which results in the generation of a nerve impulse.

—The threadlike projection of a neuron that carries an impulse away from the cell body of the neuron.

—A tendency of a cell membrane when stimulated to allow charged (ionic) chemical particles to enter or leave the cell. This favors the neutralization of excess positive or negative particles within the cell.

—Cluster of nerve cell bodies. In vertebrates, found outside of the central nervous system and act as relay stations for impulses. In invertebrates, act as a "central" control.

—The internal stability of an organism.

—A multilayered membrane system of a Schwann cell that wraps around an axon. Made up of lipoproteins that act as insulators in speeding up the transmission of nerve impulses.

—Bundles of axons in a connective tissue sheath which follow a specific path.

—A transient change in the electro-chemical nature of a neuron.

—Cell specialized to receive and transmit impulses; functional unit of the nervous system.

—A chemical released at the end of an axon which is picked up by receptors such as dendrites, muscles, or secretory cells.

—Two different charges on either side of a membrane caused by a difference in the distribution of charges; in resting nerve cells maintained by the sodiumpotassium pump.

—A rapid response to a stimulus that involves a sensory and motor neuron and may involve an interneuron.

—Recovery period for the neuron in which no new impulse can be generated; it cannot respond to a stimulus until it is repolarized.

—A special transport protein in the membrane of cells that moves sodium ions out and potassium ions into the cell against their concentration gradients.

—Junction between cells where the exchange of electrical or chemical information takes place.