Regulation Of The Heart 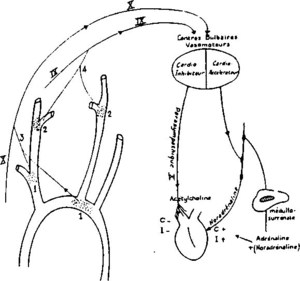 Various intrinsic, neural, and hormonal factors act to influence the rhythm control and impulse conduction within the heart. The rhythmic control of the cardiac cycle and its accompanying heartbeat relies on the regulation of impulses generated and conducted within the heart. Regulation of the cardiac cycle is also achieved via the autonomic nervous system. The sympathetic and parasympathetic divisions of the autonomic system regulate heart rhythm by affecting the same intrinsic impulse conducting mechanisms that lie within the heart in opposing ways.

Cardiac muscle is self-contractile because it is capable of generating a spontaneous electrochemical signal as it contracts. This signal induces surrounding cardiac muscle tissue to contract and a wave-like contraction of the heart can result from the initial contraction of a few localized cardiac cells.

The contractile systolic phase begins with a localized contraction of specialized cardiac muscle fibers within the sino-atrial node. The S-A node is composed of nodal tissue that contains a mixture of muscle and neural cell properties. The contraction of these fibers generates an electrical signal that then propagates throughout the surrounding cardiac muscle tissue. In a contractile wave originating at the S-A node, the right atrium muscle contracts (forcing blood into the right ventricle) and then the left atrium contracts (forcing blood into the left ventricle).

Intrinsic regulation is achieved by delaying the contractile signal at the atrioventricular node. This delay also allows the complete contraction of the atria so that the ventricles receive the minimum amount of blood to make their own contractions efficient. A specialized type of neuro-muscular cells, named Purkinje cells, form a system of fibers that covers the heart and which conveys the contractile signal from S-A node (which is also a part of the Purkinje system or subendocardial plexus). Because the Purkinje fibers are slower in passing electrical signals (action potentials) than are neural fibers, the delay allows the atria to finish their contractions prior to ventricular contractions. The signal delay by the AV node lasts about a tenth (0.1) of a second.

The contractile signal then continues to spread across the ventricles via the Purkinje system. The signal travels away from the AV node via the bundle of His before it divides into left and right bundle branches that travel down their respective ventricles.

The regulation in impulse conduction results from the fact that parasympathetic fibers utilize acetylcholine, a neurotransmitter hormone that alters the transmission of an action potential by altering membrane permeability to specific ions (e.g., potassium ions [K+]). In contrast, sympathetic postganglionic neurons secrete the neurotransmitter norepinephrine that alters membrane permeability to sodium (Na+) and calcium ions (Ca2+).

Additional hormonal control is achieved principally by the adrenal glands (specifically the adrenal medulla) that release both epinephrine and norepinephrine into the blood when stimulated by the sympathetic nervous system. As part of the fight or flight reflex, these hormones increase heart rate and the volume of blood ejected during the cardiac cycle.

The electrical events associated with the cardiac cycle are measured with an electrocardiogram (EKG). Disruptions in the impulse conduction system of the heart result in arrhythmias.

Variations in the electrical system can lead to serious, even dangerous, consequences. When that occurs an artificial electrical stimulator, called a pacemaker, must be implanted to take over regulation of the heartbeat. The small pacemaker can be implanted under the skin near the shoulder and long wires from it are fed into the heart and implanted in the heart muscle. The pacemaker can be regulated for the number of heartbeats it will stimulate per minute. Newer pacemakers can detect the need for increased heart rate when the individual is under exertion or stress and will respond.