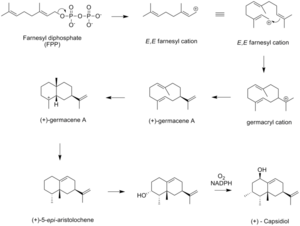 Anabolism, or biosynthesis, is the process by which living organisms synthesize complex molecules of life from simpler ones. Anabolism, together with catabolism, are the two series of chemical processes in cells that are, together, called metabolism. Anabolic reactions are divergent processes. That is, relatively few types of raw materials are used to synthesize a wide variety of end products. This results in an increase in cellular size or complexity—or both.

Anabolic processes produce peptides, proteins, polysaccharides, lipids, and nucleic acids. These molecules comprise all the materials of living cells, such as membranes and chromosomes, as well as the specialized products of specific types of cells, such as enzymes, antibodies, hormones, and neurotransmitters.

Catabolism, the opposite of anabolism, produces smaller molecules used by the cell to synthesize larger molecules, as will be described below. Thus, in contrast to the divergent reactions of anabolism, catabolism is a convergent process, in which many different types of molecules are broken down into relatively few types of end products.

The energy required for anabolism is supplied by the energy-rich molecule adenosine triphosphate (ATP). This energy exists in the form of the high-energy chemical bond between the second and third molecule of phosphate on ATP. ATP's energy is released when this bond is broken, turning ATP into adenosine diphosphate (ADP). During anabolic reactions, the high-energy phosphate bond of ATP is transferred to a substrate (a molecule worked on by an enzyme) in order to energize it in preparation for the molecule's subsequent use as a raw material for the synthesis of a larger molecule. In addition to ATP, some anabolic processes also require high-energy hydrogen atoms that are supplied by the molecule NADPH.

Although anabolism and catabolism occur simultaneously in the cell, the rates of their chemical reactions are controlled independently of each other. For example, there are two enzymatic pathways for glucose metabolism. The anabolic pathway synthesizes glucose, while catabolism breaks down glucose. The two pathways share 9 of the 11 enzymatic steps of glucose metabolism, which can occur in either sequence (i.e., in the direction of anabolism or catabolism). However, two steps of glucose anabolism use an entirely different set of enzyme-catalyzed reactions.

There are two important reasons that the cell must have separate complementary anabolic and catabolic pathways. First, catabolism is a so-called "downhill" process during which energy is released, while anabolism requires the input of energy, and is therefore an energetically "uphill" process. At certain points in the anabolic pathway, the cell must put more energy into a reaction than is released during catabolism. Such anabolic steps require a different series of reaction than are used at this point during catabolism.

Second, the different pathways permit the cell to control the anabolic and catabolic pathways of specific molecules independently of each other. This is important because there are times when the cell must slow or halt a particular catabolic or anabolic pathway in order to reduce breakdown or synthesis of a particular molecule. If both anabolism and catabolism used the same pathway, the cell would not be able control the rate of either process independent of the other: slowing the rate of catabolism would slow the rate of anabolism.

Opposite anabolic and catabolic pathways can occur in different parts of the same cell. For example, in the liver the breakdown of fatty acids to the molecule acetyl-CoA takes place inside mitochondria. Mitochondria are the tiny, membrane-bound organelles that function as the cell's major site of ATP production. The buildup of fatty acids from acetyl-CoA occurs in the cytosol of the cell, that is, in the aqueous area of the cell that contains various solutes.

Although anabolic and catabolic pathways are controlled independently, both metabolic routes share an important common sequence of reactions that is known collectively as the citric acid cycle, or Krebs cycle. The Krebs cycle is part of a larger series of enzymatic reactions collectively called oxidative phosphorylation. This pathway is an important means of breaking down glucose to produce energy, which is stored in the form of ATP. But the molecules produced by the Krebs cycle can also be used as precursor molecules, or raw materials, for anabolic reactions that make proteins, fats, and carbohydrates.

Despite the independence of anabolism and catabolism, the various steps of these processes are in some ways so intimately linked that they form what might be considered an "enzymatic ecological system." In this system, a change in one part of a metabolic series of reactions can have a ripple effect throughout the linked anabolic and catabolic pathways.

For example, when the cell needs to produce specific proteins, it produces only enough of each of the various amino acids needed to synthesize those proteins. Moreover, certain amino acids are used by the cell to make glucose, which appears in the blood, or glycogen, a carbohydrate stored in the liver. So the products of amino acid catabolism do not accumulate, but rather feed the anabolic pathways of carbohydrate synthesis. Thus, while many organisms store energy-rich nutrients such as carbohydrates and fat, most do not store other biomolecules, such as proteins, or nucleic acids, the building blocks of deoxyribonucleic acid (DNA).