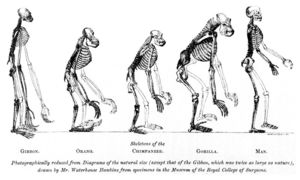 Evidence of evolution can be observed in numerous ways, including distribution of species (both geographically and through time), comparative anatomy, taxonomy, embryology, cell biology, molecular biology, and paleontology.

The English naturalist Charles Darwin (1809–1882) formulated the theory of evolution through natural selection in his ground breaking publication The Origin of Species by Means of Natural Selection, published in 1859. One of the first observations that Darwin made, prompting him to become a pioneer of evolutionary thinking, was on his journey aboard the HMS Beagle as a naturalist. Prior to the work of Darwin, most people accepted the biblical account of creation where all animals and plants were brought into the world, also called creationism. Darwin made extensive collections of the plants and animals that he came across wherever the ship stopped, and very soon he started to notice patterns within the organisms he studied.

Similarities emerged between organisms collected from widely differing areas. As well as the similarities, there were also striking differences. For example, mammals are present on all of the major landmasses; however, these mammals are different, even in similar habitats. One explanation of this is that in the past when the land-masses were joined, mammals spread over all of the available land. Subsequently, this land moved apart, and the animals became isolated. As time passed, random variation due to natural selection within the populations occurred. This process is known as adaptive radiation. From the same basic origin, many different forms have evolved. Each environment is slightly different, and slightly different forms are better suited to survive.

Evolution has historically been a subject of considerable debate mainly due to the difficulties in testing scientific hypotheses that are inherently associated with the topic. It is difficult to imagine how the magnanimous interspecies as well as intraspecies diversification could exist without evolutionary pathways. There are many critics that have alternative theories to describe this diversification, however, many lines of evidence exist that lend credence to the theory of evolution. This evidence helps to understand why, for example, islands in the Galapagos are inhabited be various organisms that are similar to those in the mainland, but belong to a different species, or why thousands of snail species and other mollusks are found only in Hawaii. A possible biological explanation is that the diversity and number of related species in these isolated habitats is a consequence of the evolutionary mechanisms that arose from a small number of common ancestors that were the original inhabitants. With the greatness in ecological diversity in different parts of the world and the absence of species competing for resources necessary for survival, diversification from evolutionary change was made possible.

If it is true that widely separated groups of organisms have ancestors in common, then intuitively it suggests they would have certain basic structures in common as well. The more structures they have in common, the more closely related they must be. The study of evolutionary relationships based on similarities and differences in the structural makeup of certain species is called comparative anatomy. What scientists look for are structures that may serve entirely different functions, but are basically similar. Such homologous (meaning the same) structures suggest a common ancestor. A classic example of this is the pentadactyl (five digits, as in the hand of humans) limb, which in suitably modified forms can be seen in all mammals. A even greater modified version of this can also be seen amongst birds.

Evolutionary relationships are reflected in taxonomy. Taxonomy is an artificial, hierarchical system showing categorical relationships between species based on specific defining characteristics. Each level within the taxonomic system denotes a greater degree of relatedness to a particular the organism if it is closer in the hierarchical scheme.

In embryology, the developing fetus is studied, and similarities with other organisms are observed. For example, annelids and mollusks are very dissimilar as adults. If, however, the embryo of a ragworm and a whelk are studied, one sees that for much of their development they are remarkably similar. Even the larvae of these two species are very much alike. This suggests that they both belong to a common ancestor. It is not, however, true that a developing organism replays its evolutionary stages as an embryo. There are some similarities with the more conserved regions, but embryonic development is subjected to evolutionary pressures as much as other areas of the life cycle.

The analysis of developmental stages of various related species, particularly involving reproduction suggests common descent and supports evolution. Sexual reproduction in both apes and humans, for example, is very similar. Molecular biology also produces evidences supporting evolution. Organisms such as fruit flies have similar gene sequences that are active in specific times during development and these sequences are very similar to sequences in mice and even humans that are activated in similar ways during development.

Even in cell biology, at the level of the individuals cell, there is evidence of evolution in that there are many similarities that can be observed when comparing various cells from different organisms. Many structures and pathways within the cell are important for life. The more important and basic to the functioning of the tissues in which cells contribute, the more likely it will be conserved. For example, the DNA code (the genetic material in the cell) is the very similar in comparing DNA from different organisms.

In molecular biology, the concept of a molecular clock has been suggested. The molecular clock related to the average rate in which a gene (or a specific sequence of DNA that encodes a protein) or protein evolves. Genes evolve at different rates the proteins that they encode. This is because gene mutations often do not change the protein. But due to mutations, the genetic sequence of a species changes over time. The more closely related the two species, the more likely they will have similar sequences of their genetic material, or DNA sequence. The molecular clock provides relationships between organisms and helps identify the point of divergence between the two species. Pseudogenes are genes that are part of an organisms DNA but that have evolved to no longer have important functions. Pseudogenes, therefore, represent another line of evidence supporting evolution, which is based on concepts derived from molecular genetics.

Perhaps the most persuasive argument that favors evolution is the fossil record. Paleontology (the study of fossils) provides a record that many species that are extinct. By techniques such as carbon dating and studying the placement of fossils within the ground, an age can be assigned to the fossil. By placing fossils together based on their ages, a gradual change in form can be identified, which can be carefully compared to species that currently exist. Although fossil records are incomplete, with many intermediate species missing, careful analysis of habitat, environmental factors at various timepoints, characteristics of extinct species, and characteristics of species that currently exist supports theories of evolution and natural selection.