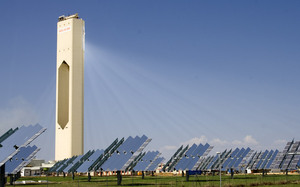 Nonrenewable fossil fuels—coal, petroleum, and natural gas—provide more than 85% of the energy used around the world. In the United States, fossil fuels comprise 81.6% of the total energy supply, nuclear power provides 7.7%, and all renewable energy sources provide 7.3%. Wind power, active and passive solar systems, geothermal energy, and biomass are examples of renewable or alternative energy sources. Although such alternative sources make up a small fraction of total energy production today, their share is growing. Scientists estimate that easily extractable fossil fuels will be largely used up within the twenty-first century (known petroleum reserves will last less than 40 years at current rates of use). Nuclear power has several drawbacks, among which are military vulnerability, and waste disposal problems. Further, nuclear power technologies cannot be disseminated globally without disseminating at the same time all of the materials and much of the know-how for producing nuclear weapons. Achieving wider use of renewable sources of energy is thus, seen by many planners as key for a sustainable global economy. In 2002, the 15-nation European Union declared its intention to shift away from both fossil fuels and nuclear power, with an initial goal of generating 12% of its total energy and 22% of its electricity from renewable sources by 2010.

The exact contribution that alternative energy sources make to the total primary energy used around the world is not known. Conservative estimates place their share at only 3–4%, but some energy experts dispute these figures. U.S. energy analysts have argued that the statistics collected are based primarily on data supplied by large electric utilities and the regions they serve, and so do not fully account for areas remote from major power grids, which are more likely to use solar energy, wind energy, biomass, and other alternative sources. When these areas are taken into consideration, alternative energy sources may already contribute as much as 11% to the total primary energy used in, for example, the United States, where alternative use is lower than in most poor countries. Animal manure, furthermore, is widely used as an energy source in India, parts of China, and many African nations. When this is taken into account, the percentage of the worldwide contribution of alternative sources to energy production could rise as high as 10–15%.