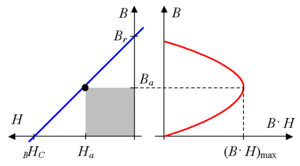 A magnetic is a piece of metal that has the ability to attract iron, nickel, cobalt, or certain specific other kinds of metal. Every magnet contains two distinct regions, one known as the north pole and one, the south pole. As with electrical charges, unlike poles attract each other and like poles repel each other.

A study of magnets allows the introduction of a new concept in energy, the concept of a field. An energy field is a region in space in which a magnetic, electrical, or some other kind of force can be experienced. For example, imagine that a piece of iron is placed at a distance of 2 in (5 cm) from a bar magnet. If the magnet is strong enough, it may pull on the iron strongly enough to cause it to move. The piece of iron is said to be within the magnetic field of the bar magnet.

The concept of an energy field was, at one time, a very difficult one for scientists to understand and accept. How could one object exert a force on another object if the two were not in contact with each other? Eventually, it became clear that forces can operate at a distance from each other. Electrical charges and magnetic poles seem to exert their forces throughout a field along pathways known as lines of force.

One of the great discoveries in the history of physics was made by the English physicist James Clerk Maxwell (1831-1879) in the late nineteenth century. Maxwell found that the two major forms of energy known as electricity and magnetism are not really different from each other, but are instead closely associated with each other. That is, every electrical current has associated with it a magnetic field and every changing magnetic field creates its own electrical current.

As a result of Maxwell's work, it is often more correct to speak of electromagnetic energy, a form of energy that has both electrical and magnetic components. Scientists now know that a number of seemingly different types of energy are all actually forms of electromagnetic energy. These include x rays, gamma rays, ultraviolet light, visible light, infrared radiation, radio waves, and microwaves. These forms of electromagnetic energy differ from each other in terms of the wavelength and frequency of the energy wave on which they travel. The waves associated with x rays, for example, have very short wavelengths and very high frequencies, while the waves associated with microwaves have much longer wavelengths and much lower frequencies.