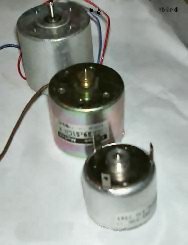 The major physical principles behind the operation of an electric motor are known as Ampère's law and Faraday's law. The first states that an electrical conductor sitting in a magnetic field will experience a force if any current flowing through the conductor has a component at right angles to that field. Reversal of either the current or the magnetic field will produce a force acting in the opposite direction. The second principle states that if a conductor is moved through a magnetic field, then any component of motion perpendicular to that field will generate a potential difference between the ends of the conductor.

An electric motor consists of two essential elements. The first, a static component which consists of magnetic materials and electrical conductors to generate magnetic fields of a desired shape, is known as the stator. The second, which also is made from magnetic and electrical conductors to generate shaped magnetic fields which interact with the fields generated by the stator, is known as the rotor. The rotor comprises the moving component of the motor, having a rotating shaft to connect to the machine being driven and some means of maintaining an electrical contact between the rotor and the motor housing (typically, carbon brushes pushed against slip rings). In operation, the electrical current supplied to the motor is used to generate magnetic fields in both the rotor and the stator. These fields push against each other with the result that the rotor experiences a torque and consequently rotates.

The first DC electrical motor was demonstrated by Michael Faraday in England in 1821. Since the only available electrical sources were DC, the first commercially available motors were of the DC type, becoming popular in the 1880s. These motors were used for both low power and high power applications, such as electric street railways. It was not until the 1890s, with the availability of AC electrical power that the AC motor was developed, primarily by the Westinghouse and General Electric corporations. Throughout this decade, most of the problems concerned with single and multi-phase AC motors were solved. Consequently, the principal features of electric motors were all developed by 1900.