Algae And Their Characteristics, Types Of Algae, Ecological Relationships, Factors Limiting The Productivity Of Algae 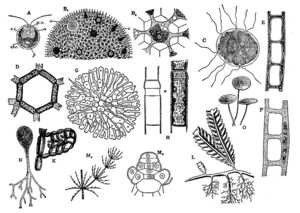 Algae (singular: alga) are photosynthetic, eukaryotic organisms that do not develop multicellular sex organs. Algae can be unicellular, or they may be large, multicellular organisms. Algae can occur in salt or fresh waters, or on the surfaces of moist soil or rocks. The multicellular algae develop specialized tissues, but they lack the true stems, leaves, or roots of the more complex, higher plants.

The algae are not a uniform group of organisms. They actually consist of seven divisions of distantly related organisms. These are considered together more as a matter of human convenience, than as a reflection of their ordered, biological, or evolutionary relationships. Therefore, the term "algae" is a common one, rather than a word that connotes a specific, scientific meaning.

The Euglenophyta or euglenoids are 800 species of unicellular, protozoan-like algae, most of which occur in fresh waters. The euglenoids lack a true cell wall, and are bounded by a proteinaceous cell covering known as a pellicle. Euglenophytes have one to three flagellae for locomotion, and they store carbohydrate reserves as paramylon. The primary photosynthetic pigments of euglenophytes are chlorophylls a and b, while their accessory pigments are carotenoids and xanthophylls.

The Chrysophyta are the golden-brown algae and diatoms, which respectively account for 1,100 and 40,000-100,000 species of unicellular algae. These algae occur in both marine and fresh waters, although most species are marine. The cell walls of golden-brown algae and diatoms are made of cellulose and pectic materials, a type of hemicellulose. In the diatoms especially, the cell wall is heavily impregnated with silica and is therefore quite rigid and resistant to decay. These algae store energy as a carbohydrate called leucosin, and also in oil droplets. The golden-brown algae achieve locomotion using one to two flagellae. The photosynthetic pigments of these algae are chlorophylls a and c, and the accessory pigments are carotenoids and xanthophylls, including a specialized pigment known as fucoxanthin.

Communities of diatoms (class Bacillariophyceae) can be extremely diverse, with more than 500 species commonly recorded from the phytoplankton, periphyton, and surface muds of individual ponds and lakes. Diatoms have double shells, or frustules, that are largely constructed of silica (SiO2), the two halves of which (called valves) fit together like a pillbox. Diatom species are distinguished on the basis of the shape of their frustules, and the exquisite markings on the surface of these structures.

The golden-brown algae (class Chrysophyceae) are much less diverse than the diatoms. Some species of golden-brown algae lack cell walls, while others have pectin-rich walls. Golden-brown algae are especially important in open waters of the oceans, where they may dominate the productivity and biomass of the especially tiny size fractions of the phytoplankton. These are known as the nanoplankton, consisting of cells smaller than about 0.05 mm in diameter.

The Pyrrophyta are the fire algae, including the dinoflagellates, which together account for 1,100 species of unicellular algae. Most of these species occur in marine ecosystems, but some are in fresh waters. The dinoflagellates have cell walls constructed of cellulose, and have two flagellae. These algae store energy as starch. The photosynthetic pigments of the Pyrrophyta are chlorophylls a and c, and the accessory pigments are carotenoids and xanthophyll, including fucoxanthin.

The Chlorophyta or green algae consist of about 7,000 species, most of which occur in fresh water, although some others are marine. Most green algae are microscopic, but a few species, such as those in the genus Cladophora, are multicellular and macroscopic. The cell walls of green algae are mostly constructed of cellulose, with some incorporation of hemicellulose, and calcium carbonate in some species. The food reserves of green algae are starch, and their cells can have two or more organelles known as flagella, which are used in a whiplike fashion for locomotion. The photosynthetic pigments of green algae are chlorophylls a and b, and their accessory pigments are carotenoids and xanthophylls.

Some common examples of green algae include the unicellular genera Chlamydomonas and Chlorella, which have species dispersed in a wide range of habitats. More complex green algae include Gonium, which forms small, spherical colonies of four to 32 cells, and Volvox, which forms much larger, hollow-spherical colonies consisting of tens of thousands of cells. Some other colonial species are much larger, for example, Cladophora, a filamentous species that can be several meters long, and Codium magnum, which can be as long as 26 ft (8 m).

The life cycle of Chlorococcum, a green alga.


The stoneworts (class Charophyceae) are a very distinctive group of green algae that are sometimes treated as a separate division (the Charophyta). These algae can occur in fresh or brackish waters, and they have cell walls that contain large concentrations of calcium carbonate. Charophytes have relatively complex growth forms, with whorls of "branches" developing at their tissue nodes. Charophytes are also the only algae that develop multicellular sex organs, although these are not comparable to those of the higher plants.


The Rhodophyta or red algae are 4,000 species of mostly marine algae, which are most diverse in tropical waters. Species of red algae range from microscopic to macroscopic in size. The larger species typically grow attached to a hard substrate, or they occur as epiphytes on other algae. The cell walls of red algae are constructed of cellulose and polysaccharides, such as agar and carrageenin. These algae lack flagellae, and they store energy as a specialized polysaccharide known as floridean starch. The photosynthetic pigments of red algae are chlorophylls a and d, and their accessory pigments are carotenoids, xanthophyll, and phycobilins.

Some examples of red algae include filamentous species such as Pleonosporum spp., so-called coralline algae such as Porolithon spp., which become heavily encrusted with calcium carbonate and contribute greatly to the building of tropical reefs, and thalloid species, such as the economically important Irish moss ( Chondrus crispus).

The Paeophyta or brown algae number about 1,500 species, almost all of which occur in marine environments. These seaweeds are especially abundant in cool waters. Species of brown algae are macroscopic in size, including the giant kelps that can routinely achieve lengths of tens of meters. Brown algae have cell walls constructed of cellulose and polysaccharides known as alginic acids. Some brown algae have relatively complex, differentiated tissues, including a holdfast that secures the organism to its substrate, air bladders to aid with buoyancy, a supporting stalk or stipe, wide blades that provide the major surface for nutrient exchange and photosynthesis, and spore-producing, reproductive tissues. The specialized, reproductive cells of brown algae are shed into the water and are motile, using two flagella to achieve locomotion. The food reserves of these algae are carbohydrate polymers known as laminarin. Their photosynthetic pigments are chlorophylls a and c, while the accessory pigments are carotenoids and xanthophylls, including fucoxanthin, a brown-colored pigment that gives these algae their characteristic dark color.

Some examples of brown algae include the sargassum weed (Sargassum spp.), which dominates the extensive, floating ecosystem in the mid-Atlantic gyre known as the Sargasso Sea. Most brown seaweeds, however, occur on hard-bottom, coastal substrates, especially in cooler waters. Examples of these include the rockweeds (Fucus spp. and Ascophyllum spp.), the kelps (Laminaria spp.), and the giant kelps (Macrocystis spp. and Nereocystis spp.). The giant kelps are by far the largest of the algae, achieving a length as great as 328 ft (100 m).

The Xanthophyta or yellow-green algae are 450 species that primarily occur in fresh waters. They are unicellular or small-colonial algae, with cell walls made of cellulose and pectic compounds, and sometimes containing silica. The yellow-green algae store carbohydrate as leucosin, and they can have two or more flagellae for locomotion. The primary photosynthetic pigment of yellow-green algae is chlorophyll a, and the accessory pigments are carotenoids and xanthophyll.