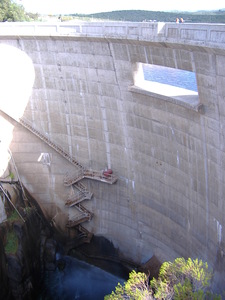 Dams have long been acknowledged for providing electricity without the pollution of other methods, for flood protection, and for making water available for agriculture and human needs. Within recent decades, however, the environmental impacts of dams have been debated. While dams do perform important functions, their effects can be damaging to the environment. People have begun to question whether the positive contributions of some dams are outweighed by those negative effects.

The damming of a river will have dramatic consequences on the nature of the environment both upstream and downstream of the dam. The magnitude of these effects are usually directly related to the size of the dam.

Prior to dam construction, most natural rivers have a flow rate that varies widely throughout the year in response to varying conditions. Of course once constructed, the flow rate of the river below a dam is restricted. The dam itself and the need to control water releases for the various purposes of the particular dam result in a flow rate that has a smaller range of values and peaks that occur at times related to need rather than the dictates of nature. In cases where the entire flow has been diverted for other uses, there may no longer be any flow in the original channel below the dam.

Because water is held behind the dam and often released from some depth, the temperature of the water below the dam is usually lower than it would be prior to dam emplacement. The temperature of the water flow is often constant, not reflecting the natural seasonal variations that would have been the case in the free-flowing river. Similarly, the chemistry of the water may be altered. Water exiting the lake may be higher in dissolved salts or have lower oxygen levels than would be the case for a free-flowing river.

Impoundments increase the potential for evaporation from the river. Because the surface area of a lake is so great when compared to the river that supplies it, the loss of water to evaporation must be considered. In some desert areas, potential annual evaporation can be greater than 7 ft (2.1 m), meaning that over the course of one year, if no water flowed into or out of the system, the reservoir would drop in elevation by 7 ft (2.1 m). At Lake Mead on the Colorado River in Arizona and Nevada, evaporation losses in one year can be as great as 350 billion gal (1.3 trillion l).

The impoundment of water behind a dam causes the velocity of the water to drop. Sediment carried by the river is dropped in the still water at the head of the lake. Below the dam, the river water flows from the clear water directly behind the dam. Because the river no longer carries any sediment, the erosive potential of the river is increased. Erosion of the channel and banks of the river below the dam will ensue. Even further downstream, sediment deprivation affects shoreline processes and biological productivity of coastal regions.

This problem has occurred within the Grand Canyon below Glen Canyon Dam. After the construction of the dam was completed in 1963, erosion of the sediment along the beaches began because of the lack of incoming sediment. By the early 1990's, many beaches were in danger of disappearing. In the spring of 1996, an experimental controlled flood of the river below Glen Canyon Dam was undertaken to attempt to redistribute existing sediments along the sides of the channel. While many of the beaches were temporarily rebuilt, this redistribution of sediments was short lived. Research on this issue is continuing, however, the fundamental problem of the lack of input sediment for the river downstream of the dam remains unresolved.

The environmental changes described above create a new environment in which native species may or may not be able to survive. New species frequently invade such localities, further disrupting the system. Early photographs of rivers in the southwest desert illustrate the dramatic modern invasion of non-native plants. Entire lengths of these rivers and streams have been transformed from native desert plants to a dense riparian environment. Native species that formerly lived in this zone have been replaced as a result of the changes in river flow patterns. The most commonly cited species affected by the presence of dams is the salmon. Salmon have been isolated from their spawning streams by impassable dams. The situation has been addressed through the use of fish ladders and by the use of barges to transport the fish around the obstacles, but with only limited success.

Fradkin, Philip L. A River No More: The Colorado River and the West. Berkeley: University of California Press, 1996.

—A thin concrete dam that is curved in the upstream direction.

—A dam constructed of concrete and steel that is characterized by angled supports on the downstream side.

—The phase of the Southern Oscillation characterized by increased sea water temperatures and rainfall in the eastern Pacific, with weakening trade winds and decreased rain along the western Pacific.

—A massive concrete or masonry dam that resists the force of the water by its own weight.

—The body of water, a pond or lake, that forms behind a dam.

—The capacity of a geologic material to transmit a fluid, such as water.

—A passage for water to flow around a dam.