Properties And Uses Of Chlorine 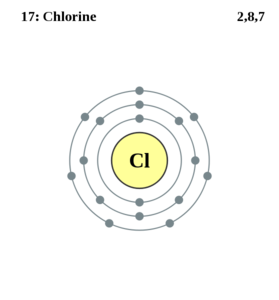 Because it is so reactive, chlorine is never found alone-chemically uncombined—in nature. It is prepared commercially by passing electricity through a water solution of sodium chloride or through molten sodium chloride.

When released as the free element, chlorine gas consists of diatomic (two-atom) molecules, as expressed by the formula Cl2. The gas is very irritating to the mucous membranes of the nose, mouth and lungs. It can be smelled in the air at a concentration of only 3 parts per million (ppm); it causes throat irritation at 15 ppm, coughing at 30 ppm, and is very likely to be fatal after a few deep breaths at 1,000 ppm.

Chlorine gas dissolves readily in water, reacting chemically with it to produce a mixture of hydrochloric acid (HCl) and hypochlorous acid (HOCl), plus some unreacted Cl2. This solution, called chlorine water, is a strong oxidizing agent that can be used to kill germs or to bleach paper and fabrics. It is used to obtain bromine (another member of its halogen family) from sea water by oxidizing bromide ions to elemental bromine.

In organic chemistry, chlorine is widely used, not only as an oxidizing agent, but as a way of making many useful compounds. For example, chlorine atoms can easily replace hydrogen atoms in organic molecules. The new molecules, with their chlorine atoms sticking out, are much more reactive and can react with various chemicals to produce a wide variety of other compounds. Among the products that are manufactured by the use of chlorine somewhere along the way are antiseptics, dyes, explosives, foods, insecticides, medicines, metals, paints, paper, plastics, refrigerants, solvents, and textiles.

Probably the most important use of chlorine is as a water purifier. Every water supply in the United States and in much of the rest of the world is rendered safe for drinking by the addition of chlorine. Several chlorine-releasing compounds are also used as general disinfectants.

Bleaching is another very practical use of chlorine. Until it was put to use as a bleach around 1785, bright sunlight was the only way people could bleach out stains and undesired colors in textiles and paper. Today, in the form of a variety of compounds, chlorine is used almost exclusively. Here's how it works: many compounds are colored because their molecules contain loose electrons that can absorb specific colors of light, leaving the other colors unabsorbed and therefore visible. An oxidizing agent such as chlorine water or a compound containing the hypochlorite ion OCl- removes those electrons (an oxidizing agent is an electron remover), which effectively removes the substance's light-absorbing power and therefore its color. Ordinary laundry bleach is a 5.25% solution of sodium hypochlorite in water.