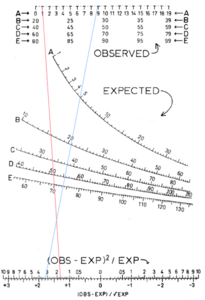 The chi-square test (KHGR2) is the most commonly used method for comparing frequencies or proportions. It is a statistical test used to determine if observed data deviate from those expected under a particular hypothesis. The chi-square test is also referred to as a test of a measure of fit or "goodness of fit" between data. Typically, the hypothesis tested is whether or not two samples are different enough in a particular characteristic to be considered members of different populations. Chi-square analysis belongs to the family of univariate analysis, i.e., those tests that evaluate the possible effect of one variable (often called the independent variable) upon an outcome (often called the dependent variable).

The chi-square analysis is used to test the null hypothesis (H0), which is the hypothesis that states there is no significant difference between expected and observed data. Investigators either accept or reject H0, after comparing the value of chi-square to a probability distribution. Chi-square values with low probability lead to the rejection of H0 and it is assumed that a factor other than chance creates a large deviation between expected and observed results. As with all non-parametric tests (that do not require normal distribution curves), chi-square tests only evaluate a single variable, thus they do not take into account the interaction among more than one variable upon the outcome.

A chi-square analysis is best illustrated using an example in which data from a population is categorized with respect to two qualitative variables. Table 1 shows a sample of patients categorized with respect to two qualitative variables, namely, congenital heart defect (CHD; present or absent) and karyotype (trisomy 21, also called Down syndrome, or trisomy 13, also called Patau syndrome). The classification table used in a chi-square analysis is called a contingency table and this is its simplest form (2 x 2). The data in a contingency table are often defined as row (r) and column (c) variables.


Chi-square is the sum of the squared difference between observed and expected data, divided by the expected data in all possible categories:

Table 3 presents observed and expected frequencies and Χ2 for data in Table 1.

Once the degrees of freedom are determined, the value of Χ2 is compared with the appropriate chi-square distribution, which can be found in tables in most statistical analyses texts. A relative standard serves as the basis for accepting or rejecting the hypothesis. In biological research, the relative standard is usually p = 0.05, where p is the probability that the deviation of the observed frequencies from the expected frequencies is due to chance alone. If p is less than or equal to 0.05, then the null hypothesis is rejected and the data are not independent of each other. For one degree of freedom, the critical value associated with p = 0.05 for Χ2 is 3.84. Chi-square values higher than this critical value are associated with a statistically low probability that H0 is true. Because the chi-square value is 11.44, much greater than 3.84, the hypothesis that the proportion of trisomy-13-affected patients with CHD does not differ significantly from the corresponding proportion for trisomy-21-affected patients is rejected. Instead, it is very likely that there is a dependence of CHD on karyotype.

Because a chi-square test is a univariate test; it does not consider relationships among multiple variables at the same time. Therefore, dependencies detected by chi-square analyses may be unrealistic or non-causal. There may be other unseen factors that make the variables appear to be associated. However, if properly used, the test is a very useful tool for the evaluation of associations and can be used as a preliminary analysis of more complex statistical evaluations.