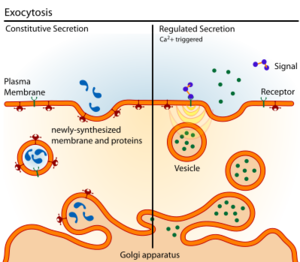 Vesicles are small, membrane-bounded spheres that contain various macromolecules. Some vesicles, as we have seen, are used to transport macromolecules from the endoplasmic reticulum to the Golgi body, and from the Golgi body to various destinations. Special kinds of vesicles perform other functions as well. Lysosomes are vesicles that contain enzymes involved in cellular digestion. Some protists, for instance, engulf other cells for food. In a process called phagocytosis, the protist surrounds a food particle and engulfs it within a vesicle. This food containing vesicle is transported within the protist's cytoplasm until it is contiguous with a lysosome. The food vesicle and lysosome merge, and the enzymes within the lysosome are released into the food vesicle. The enzymes break the food down into smaller parts for use by the protist.

Lysosomes, however, are found in all kinds of cells. In all cells, lysosomes digest old, worn-out organelles. They also play a role in the self-destruction of old cells. Although scientists do not understand the trigger mechanism of this self-destruction, cells that are not functioning properly due to old-age apparently self-digest by means of lysosomes. Cell death is also a component of normal developmental processes. For instance, a human fetus has web-like hands and feet. As development progresses, the cells that compose these webs slowly self-destruct, freeing the fingers.