Steam to Electricity, Sending Elecricity, The Grid, Voltage, From Substation to House, Safe to Use

Electricity is made by turning other forms of energy into electrical energy. This is what power plants do. There, fuels such as coal and oil are burned. This powers machines called generators. These machines produce electricity.

Nuclear power plants produce large amounts of energy. They use only small amounts of fuel.

ALL DAY, EVERY DAY

Power plants cannot store the electricity they make. They make it twenty four hours a day, every day of the year. If they did not, there would not be enough electricity.

Many power plants use coal. Burning the coal heats water and turns it into steam. The force of the steam turns large fan blades. These are connected to a pole that then turns a generator. Magnets spin around inside the generator. This makes electrons jump across coils of copper wire to produce a current of electricity.

Different fuels can be used to produce electricity. No matter which fuel is used, the electricity made is the same. 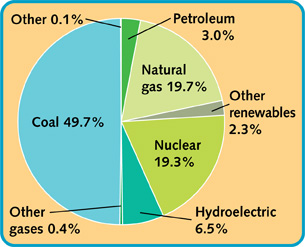 Which fuels were used most to make electricity in the United States in 2005?

Electricity is made and then sent to where it is needed. It flows out from the plant along wires and cables. These wires and cables carry the power to houses and businesses.

The cables and wires that carry electricity crisscross the country. Together, they are known as the grid. They run underground, above ground, and even under the oceans. Wires that run above ground are carried between tall poles. In some places, the poles are replaced by tall towers. 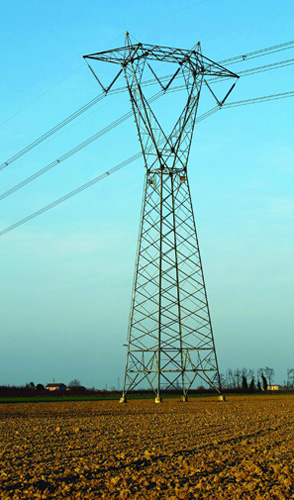 Tall towers called pylons support the electrical cables. Electricity can be sent around the country. 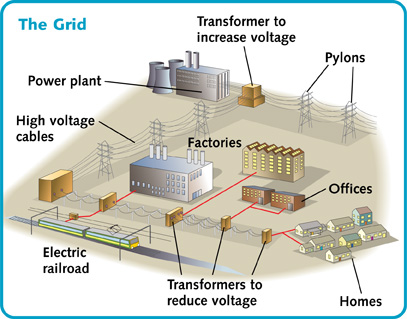 The push of the electricity that leaves the power plant is very powerful. It is known as high voltage. This is too strong to use safely in houses and schools. So the electricity stops at a substation. Here, the voltage is reduced in a machine. It is called a transformer. The electricity then rolls on to villages, towns, and cities. It is safe to use.

From Substation to House

Look outside your house or apartment. You may see an electrical pole with a small box on the side. This is a small transformer. It lowers the voltage even more before it is cused in your house. 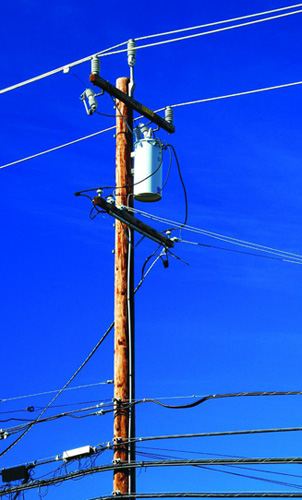 Electricity produced in a power plant travels miles along cables and wires like these.

Strong storms and icy weather can harm electricity poles. This can stop the flow of electricity. But in some places, cables are run underground. This protects them from the weather. It helps avoid power loss. 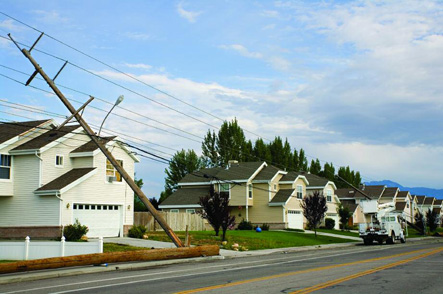