So electricity makes the light glow when you flip on the switch. To understand why, we need to look at the tiniest bits of matter that make up our world.

Everything around us is made of matter. Matter is made up of tiny atoms. Imagine you tear a piece of aluminum foil in half. It still looks like foil. Now imagine you tear it up into thousands of pieces that can only be seen through a microscope. These pieces are called atoms. 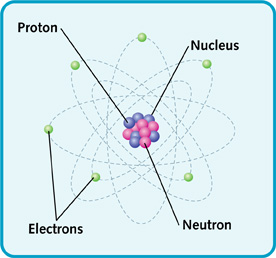 The main parts of an atom.

Atoms are so small you can only see them through a microscope. There are a million of them on one pin head! 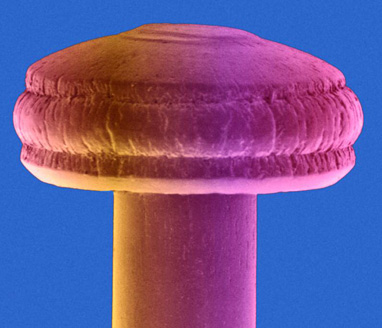 Each atom has a center called a nucleus. The nucleus is made up of tiny parts, or particles. These are called protons and neutrons. Circling the nucleus are more particles. These are electrons. Each electron has an electrical charge. They jump from atom to atom to create an electrical current. It takes the movement of about six billion electrons every second to light a lightbulb!

Electrons move, or hop, from atom to atom. This creates a flow of electrical charge. This flow is called a current.

The flow of electrons jumping from atom to atom creates an electric current.

Light, heat, or a chemical reaction can make electrons move from one atom to another. As the electrons bump from atom to atom they create an electrical flow. The electrical current runs in a path like a circular running track, called a circuit.

Imagine a row of dominoes. One falls and knocks the others down, one by one. Electrons bump from atom to atom in a similar way. 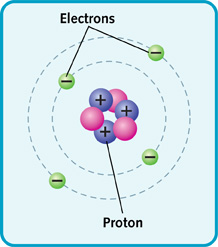 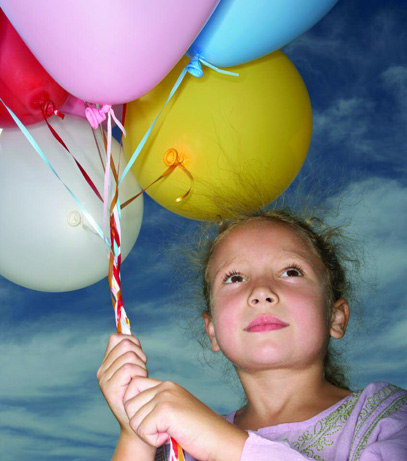 Positive and negative charges on the balloon and the girl's hair attract each other.

Have you ever rubbed a balloon against a sweater? Did the balloon stick to the sweater? This is caused by static electricity. It collects on the surfaces of some materials when they are rubbed together. The positive charges on one material attract the negative charges on the other. This makes static electricity. When there are equal numbers of charges again, the balloon falls off.

Two objects with lots of positively charged particles (protons) come together. You will see the particles try to push each other away. Objects with opposite charges (protons and electrons) attract each other. This is because the different charges try to balance each other out. If you comb your hair on a dry day with a plastic comb, the comb attracts electrons. That leaves your hair with too many protons. Each strand of hair will try to move away from the others!

Walk across the carpet. Your shoes will gather up negative electrons. These whizz around your body looking for positive protons. Then you touch a metal door knob. The electrons are pulled toward the protons in the metal. As they jump across to the metal, it produces a tiny electric shock.

Static electricity is used in photocopiers. Inside the machine, positively charged particles attract particles of black powder. The black powder is used to copy the image. 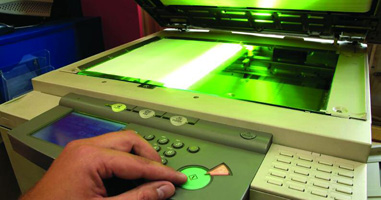 It is a stormy day. The flash of lightning you see is a huge spark of electricity. Lightning is created by the attraction between opposite charges. This is the same force that creates static electricity. As electrons whirl inside a cloud or toward the ground, they heat the air around them. This creates the glow we see as lightning. What you are seeing is the path of electricity. 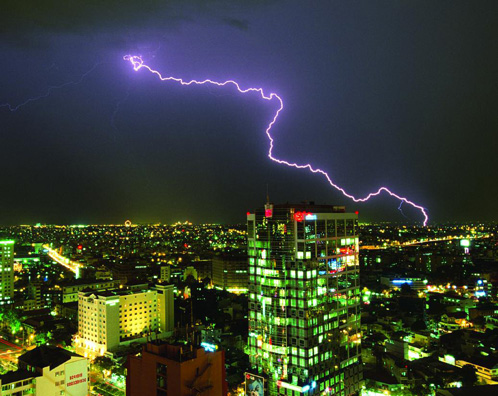 A flash of lightning contains enough energy to light a 100-watt bulb for three months! 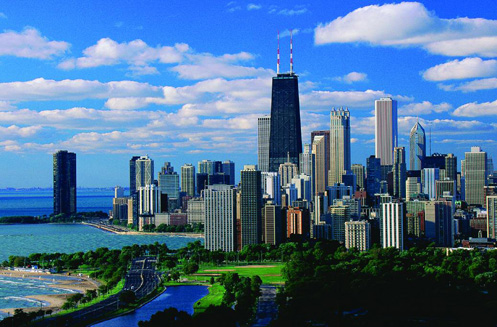 Lightning is attracted to the conductors (on the tallest building in the center of this photograph). The lightning then avoids striking nearby buildings and people in the area.

Benjamin Franklin (1706–1790) was an American inventor. He discovered that lightning was a giant electrical spark. During a storm, he flew a kite with a metal key at the end of the string. Lightning flew down the string and created a spark on the key. Franklin then invented lightning rods. These are metal strips built on buildings. They carry lightning safely to the ground.

ENERGY IN A FLASH

Benjamin Franklin's experiment with the kite was dangerous. You should never try this. Lightning always looks for the quickest way to Earth. It will flow through any material through which electricity can flow. That includes human bodies.

All About Electricity and Magnetism

Magnetism is an invisible force. Some materials give it off. Magnetic force sometimes is used along with electricity. It is used to make electric motors. These provide the power for many of the machines and tools we use.

A magnet draws materials containing iron and nickel to it. Each magnet has a north pole and a south pole. Opposite poles attract each other. 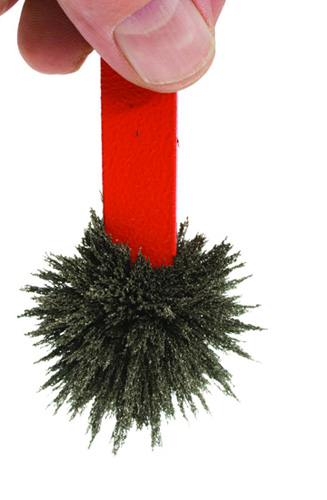 These iron filings are pulled toward the magnet.

An electric motor uses an electromagnet. It uses the magnetism to turn electrical energy into mechanical power. This is the power that makes things move. In the motor, a magnet is placed near an electromagnet. The two magnets react. A push and pull movement is created. This makes a turning movement to work a motor. 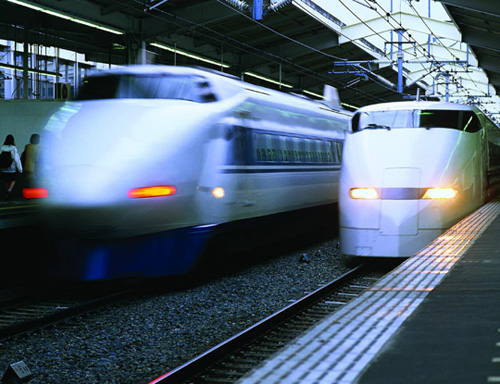 Some trains float above a magnetic field. Electromagnets start and stop the train.