The Role Of Bacteria In Fermentation 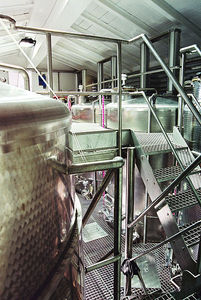 Fermenting bacteria have characteristic sugar fermentation patterns, i.e., they can metabolize some sugars but not others. For example, Neisseria meningitidis ferments glucose and maltose, but not sucrose and lactose, while Neisseria gonorrhoea ferments glucose, but not maltose, sucrose or lactose. Such fermentation patterns can be used to identify and classify bacteria.

During the 1860s, the French microbiologist Louis Pasteur studied fermenting bacteria. He demonstrated that fermenting bacteria could contaminate wine and beer during manufacturing, turning the alcohol produced by yeast into acetic acid (vinegar). Pasteur also showed that heating the beer and wine to kill the bacteria preserved the flavor of these beverages. The process of heating, now called pasteurization in his honor, is still used to kill bacteria in some alcoholic beverages, as well as milk.

Pasteur described the spoilage by bacteria of alcohol during fermentation as being a "disease" of wine and beer. His work was thus vital to the later idea that human diseases could also be caused by microorganisms, and that heating can destroy them.