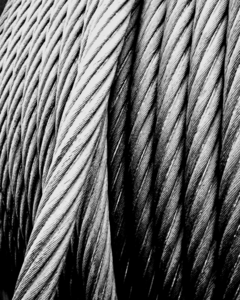 The ores used in making iron and steel are iron oxides, which are compounds of iron and oxygen. The major iron oxide ores are hematite, which is the most plentiful, limonite, also called brown ore, taconite, and magnetite, a black ore. Magnetite is named for its magnetic property and has the highest iron content. Taconite, named for the Taconic Mountains in the northeastern United States, is a low-grade, but important ore, which contains both magnetite and hematite.

Ironmaking furnaces require at least a 50% iron content ore for efficient operation. Also, the cost of shipping iron ores from the mine to the smelter can be greatly reduced if the unwanted rock and other impurities can be removed prior to shipment. This requires that the ores undergo several processes called "beneficiation." These processes include crushing, screening, tumbling, floatation, and magnetic separation. The refined ore is enriched to over 60% iron by these processes and is often formed into pellets before shipping. Taconite ore powder, after beneficiation, is mixed with coal dust and a binder and rolled into small balls in a drum pelletizer where it is then baked to hardness. About two tons of unwanted material is removed for each ton of taconite pellets shipped.

The three raw materials used in making pig iron (which is the raw material needed to make steel) are the processed iron ore, coke (residue left after heating coal in the absence of air, generally containing up to 90% carbon) and limestone (CaCO3) or burnt lime (CaO), which are added to the blast furnace at intervals, making the process continuous. The limestone or burnt lime is used as a fluxing material that forms a slag on top of the liquid metal. This has an oxidizing effect on the liquid metal underneath which helps to remove impurities. Approximately two tons of ore, one ton of coke, and a half ton of limestone are required to produce one ton of iron.

There are several basic elements which can be found in all commercial steels. Carbon is a very important element in steel since it allows the steel to be hardened by heat treatment. Only a small amount of carbon is needed to produce steel: up to 0.25% for low carbon steel, 0.25-0.50% for medium carbon steel, and 0.50-1.25% for high carbon steel. Steel can contain up to 2% carbon, but over that amount it is considered to be cast iron, in which the excess carbon forms graphite. The metal manganese is used in small amounts (0.03-1.0%) to remove unwanted oxygen and to control sulfur. Sulfur is difficult to remove from steel and the form it takes in steel (iron sulfide, FeS) allows the steel to become brittle, or hot-short, when forged or rolled at elevated temperatures. Sulfur content in commercial steels is usually kept below 0.05%. A small quantity of phosphorus (usually below 0.04%) is present, which tends to dissolve in the iron, slightly increasing the strength and hardness. Phosphorus in larger quantities reduces the ductility or formability of steel and can cause the material to crack when cold worked in a rolling mill, making it cold-short. Silicon is another element present in steel, usually between 0.5-0.3%. The silicon dissolves in the iron and increases the strength and toughness of the steel without greatly reducing ductility. The silicon also deoxidizes the molten steel through the formation of silicon dioxide (SiO2), which makes for stronger, less porous castings. Another element that plays an important part in the processing of steel is oxygen. Some large steel mills have installed their own oxygen plants, which are located near basic oxygen furnaces. Oxygen injected into the mix or furnace "charge" improves and speeds up steel production.

Steel can be given many different and useful properties by alloying the iron with other metals such as chromium, molybdenum, nickel, aluminum, cobalt, tungsten, vanadium, and titanium, and with nonmetals such as boron and silicon.