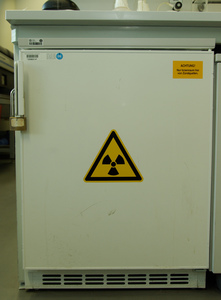 Radioisotopes are extensively used in nuclear medicine to allow physicians to explore bodily structures and functions in vivo (in the living body) with a minimum of invasion to the patient. Radioisotopes are also used in radiotherapy (radiation therapy) to treat some cancers and other medical conditions that require destruction of harmful cells.

Radioisotopes, containing unstable combinations of protons and neutrons, are created by neutron activation involving the capture of a neutron by the nucleus of an atom resulting in an excess of neutrons (neutron rich). Proton rich radioisotopes are manufactured in cyclotrons. During radioactive decay, the nucleus of a radioisotope seeks energetic stability by emitting particles (alpha, beta or positron) and photons (including gamma rays).

Although nuclear medicine traces its clinical origins to the 1930s, the invention of the gamma scintillation camera by American engineer Hal Anger in the 1950s, however, brought major advances in nuclear medical imaging and rapidly elevated the use of radioisotpes in medicine. Radioisotopes allow high quality imaging of bones, soft organs (e.g., thyroid, heart, liver, etc.). A number of diagnostic techniques in nuclear medicine use gamma ray emitting tracers. The tracers are formed from the bonding of short-lived radioisotopes with chemical compounds that allow the targeting of specific body regions or physiologic processes. Emitted gamma rays (photons) can be detected by gamma cameras and computer enhancement of the resulting images allows quick and relatively non-invasive (compared to surgery) assessments of trauma or physiological impairments.

Technetium-99 (an isotope of the artificially-produced element technetium) is a radioisotope widely used in nuclear medical procedures. Technetium-99 decays by an isomeric process which emits gamma rays and low energy beta particles (electrons). Technetium is supplied to hospitals from nuclear reactors in containment vessels initially containing molybdenum-99 that, with a half-life of 66 hours, decays to technetium-99 which is removed by flushing.

American chemist Peter Alfred Wolf's (1923–1998) work with radioisotope utilizing positron emission tomography (PET) led to the clinical diagnostic use of the PET scan. Positron emission tomography utilizes isotopes produced in a cyclotron. Positron-emitting radionuclides are injected and allowed to accumulate in the target tissue or organ. As the radionuclide decays it emits a positron that collides with nearby electrons to result in the emission of two identifiable gamma photons. PET scans use rings of detectors that surround the patient to track the movements and concentrations of radioactive tracers. PET scans have attracted the interest of physicians because of their potential use in research into metabolic changes associated with mental diseases such as schizophrenia and depression. PET scans are used in the diagnosis and characterizations of certain cancers and heart disease, as well as clinical studies of the brain.

Cancer and other rapidly dividing cells are usually sensitive to damage by radiation. Accordingly, some cancerous growths can be restricted or eliminated by radioisotope irradiation. The most common forms of external radiation therapy use gamma and x rays. During the last half of the twentieth century the radioisotope cobalt-60 was frequently used source of radiation used in such treatments. More modern methods of irradiation include the production of x rays from linear accelerators.

Internal radiotherapy involves the introduction of a radioisotope as a radiation source. Iridium-192 implants emit both gamma and beta rays that destroy surrounding target tissue. In low dose forms, strontium-89 has been used to relieve cancer-induced bone pain. Not all radioisotope techniques involve restricted sites, in the treatment of some diseases requiring bone marrow transplants the malfunctioning marrow is killed with a massive dose of radiation before the introduction of healthy marrow.

Because they can be detected in low doses, radioisotopes can also be used in sophisticated and delicate biochemical assays or analysis. There are many common laboratory tests utilizing radioisotopes to analyze blood, urine and hormones. Radioisotopes are also finding increasing use in the labeling, identification and study of immunological cells. Shielded radioisotopes are also used to power heart pacemakers and sterilize medical instruments.

Iodine-131, phosphorus-32 are commonly used in radiotherapy. More radical uses of radioisotopes include the use of Boron-10 to specifically attack tumor cells. Boron-10 concentrates in tumor cells and is then subjected to neutron beams that result in highly energetic alpha particles that are lethal to the tumor tissue.

The selection of radioisotopes for medical use is governed by several important considerations involving dosage and half-life. Radioisotopes must be administered in sufficient dosages so that emitted radiation is present in sufficient quantity to be measured. Ideally the radioisotope has a short enough half-life that, at the delivered dosage, there is insignificant residual radiation following the desired length of exposure. Regardless, the use of radioisotopes allows increasingly accurate and early diagnosis of serious pathology (e.g. tumors) and earlier diagnosis often results in more favorable outcome for patients.