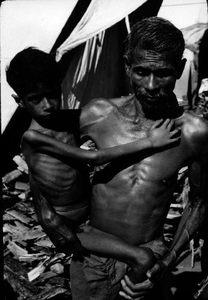 A specific wasting away disease caused by protein deficiency in third world countries that lack adequate food supplies is called kwashiorkor. It is a word which describes the condition of an infant who has to be weaned away after a year to make room for the next baby. The weaning food, which is mainly sugar and water or a starchy gruel lacks protein or has a poor quality of protein. The weaning diet for these young children leads to other nutrient deficiency diseases as well.

Symptoms of kwashiorkor are apathy, muscular wasting, and edema. Both the hair and the skin lose their pigmentation. The skin becomes scaly and there is diarrhea and anemia, and permanent blindness can result from this condition. Marasmus is another condition of a wasting away of the body tissues from the lack of calories as well as protein in the diet. In marasmus the child is fretful rather than apathetic and is skinny rather than swollen with edema. Aside from contrasting symptoms between the two diseases, there may be converging symptoms which would be described as marasmic kwashiorkor.

There is a wide variation of deficiencies between energy and protein deficient diseases as in the cases described by marasmus and kwashiorkor. The term protein-energy malnutrition (PEM) is used to describe those differences. PEM is the result of poverty as well inadequate information on diet. In some countries there is the mis-taken belief that the child should not be given high protein food, which is served to the father, while the child drinks the fluid the meat was cooked in.

In cases of severe PEM it is necessary to hospitalize the child and to administer antibiotics to prevent infections which accompany the condition. Diets rich in protein should be continued after hospitalization, using skimmed milk powder for an energy basis. Legumes (beans) and fish meal are also good sources for protein. Social and political problems have to be managed to allow relief workers to help and to provide an ongoing source of food preparations that can be consumed for adequate nourishment by those in need.