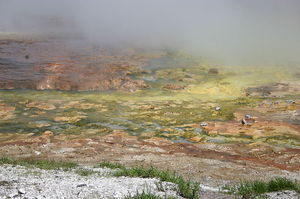 Archaebacteria are described as being obligate anaerobes; that is, they can only live in areas without oxygen. Their oxygen-free environments, and the observations that habitats of Archaebacteria can frequently be harsh (so harsh that bacteria and eukaryotic organisms such as humans cannot survive), supports the view that Archaebacteria were ones of the first life forms to evolve on Earth.

Archaebacteria are microscopic organisms with diameters ranging from 0.0002–0.0004 in (0.5–1.0 micrometer). The volume of their cells is only around one-thousandth that of a typical eukaryotic cell. They come in a variety of shapes, which can be characterized into three common forms. Spherical cells are called cocci, rod shaped cells are called bacilli, and spiral cells can either be vibrio (a short helix), spirillum (a long helix), or spirochete (a long, flexible helix). Archaebacteria, like all prokaryotes, have no membrane bound organelles. This means that the archaebacteria are without nuclei, mitochondria, endoplasmic reticula, lysosomes, Golgi complexes, or chloroplasts. The cells contain a thick cytoplasm that contains all of the molecules and compounds of metabolism and nutrition. Archaebacteria have a cell wall that contains no peptidoglycan. This rigid cell wall supports the cell, allowing an archaebacterium to maintain its shape, and protecting the cell from bursting when in a hypotonic environment. Because these organisms have no nucleus, the genetic material floats freely in the cytoplasm. The DNA consists of a single circular molecule. This molecule is tightly wound and compact, and if stretched out would be more than 1,000 times longer than the actual cell. Little or no protein is associated with the DNA. Plasmids may be present in the archaebacterial cell. These are small, circular pieces of DNA that can duplicate independent of the larger, genomic DNA circle. Plasmids often code for particular enzymes or for antibiotic resistance.