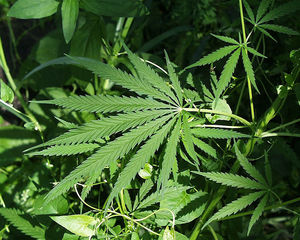 Reference to the hemp plant (cannabis) appears as early as 2700 B.C. in a Chinese manuscript. European explorers arriving to the New World first observed the plant in 1545. It was considered to be such a useful crop that early Jamestown settlers in 1607 began its cultivation and later, in Virginia, farmers were fined for not growing hemp. In 1617, it was introduced into England. From the seventeenth to the mid-twentieth century marijuana was considered a household drug useful for treating such maladies as headaches, menstrual cramps, and toothaches. From 1913-38 a stronger variety of the marijuana plant was cultivated by American drug companies for use in their drug products. It was called Cannabis americana.

Prior to 1910, the growth and trade of marijuana (and hashish—a resinous substance produced by the flowering parts of the plant) was fairly limited. However, following the conclusion of the Mexican Revolution, trafficking of the drug opened up, making growth and transport of the drug easier and more profitable. The business expanded to reach the ports of New Orleans where it was sold on the black market, alongside other strains of the plant, to sailors passing through, as well as local residents. It wasn't long before the trend of marijuana use began to overshadow the historic applications of cannabis as a medicine.

The drug soon became popular (especially its stronger derivatives—hashish, charas, ghanja, and bhang) among musicians who maintained that smoking marijuana gave them the inspiration they needed to play their music. These musicians glamorized the use of marijuana. Some claimed it gave them contemplative vision and a feeling of overwhelming freedom and verve; others not only used the drug themselves, but sold it to a variety of customers. As the entertainers went on the road, so did their drugs. Eventually, use of marijuana, alcohol, and other mind-altering drugs spread and soon became prevalent in major cities worldwide, such as Chicago, New York, London, and Paris.

Many of the musicians and entertainers of the Jazz Age who used drugs and alcohol relied heavily on gangland kings for their "gigs" (jobs). Frequently, these gangsters were able to provide (for a fee) a variety of drugs and bootleg alcohol for the performers and their staffs.

In the 1920s, as a result of the amendment prohibiting the use of alcoholic beverages (Prohibition), marijuana use as a psychoactive drug began to grow. Even after the repeal of Prohibition in 1933, marijuana was widely used, as were morphine, heroin, and cocaine. In 1937, 46 states banned the use of marijuana along with other narcotic drugs. The popular perception, however, was that marijuana was not as addictive as narcotics. It is classified today as a drug that alters mood, perception, and image, rather than as a narcotic drug. It is still considered a Schedule I drug, which means it is considered a dangerous drug with no medical use. A bill has been proposed to re-classify marijuana as a Schedule II drug, a dangerous drug with limited medical use.

By the 1960s it was widely used by the young from all social classes. It is estimated that in 1994, 17 million Americans had used marijuana, and about 1.5 million of these Americans smoke marijuana regularly. The presence of more potent strains of marijuana has widened the debate between the drug enforcement authorities and the advocates of decriminalizing marijuana use because it is, they argue, not in the same class as the more addictive drugs. Others assert that marijuana is a "gateway" drug to the harder drugs and therefore argue that rigid laws against its use and distribution should remain in effect.

Since 1976 laws allowing the limited use of marijuana for medical purposes (medical marijuana) have been enacted in 35 states (by 2003 some of these laws had expired or were specifically not renewed by state legislators). In 2002 there were broad efforts to decriminalize marijuana use in Canada and the United Kingdom. Within the United States, most state level reforms are rendered ineffectual by over-riding federal drug laws. Despite federal laws, since 1996, eight states have enacted various laws that effectively allow the limited and controlled use of medical marijuana. In those states, however, doctors and medicnal users still face possible federal criminal prosecution.

A number of marijuana legalization initiatives—ranging from legalizing limited personal use of marijuana to allowing farmers to grow marijuana to produce non-psychoactive hemp—have been rejected by voters in recent years. In November 2002, a trio of proposed reforms in Nevada, South Dakota, and Arizona were defeated by voters in those states. Supporters of marijuana legalization cite non-binding resolutions in San Francisco and Massachusetts that encouraged local and state legislators to develop decriminalization strategies as evidence of continued public interest in reforming marijuana laws. Supporters of marijuana-law reform also continue to assert poll evidence that indicates a significant portion of the public supports exploring the limited legalization of marijuana for medical use.