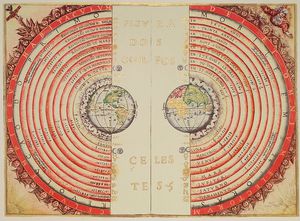 Rejected by modern science, the geocentric theory (in Greek, ge means earth), which maintained that Earth was the center of the universe, dominated ancient and medieval science. It seemed evident to early astronomers that the rest of the universe moved about a stable, motionless Earth. The Sun, Moon, planets, and stars could be seen moving about Earth along circular paths day after day. It appeared reasonable to assume that Earth was stationary, for nothing seemed to make it move. Furthermore, the fact that objects fall toward Earth provided what was perceived as support for the geocentric theory. Finally, geocentrism was in accordance with the theocentric (God-centered) world view, dominant in in the Middle Ages, when science was a subfield of theology.

The geocentric model created by Greek astronomers assumed that the celestial bodies moving about the Earth followed perfectly circular paths. This was not a random assumption: the circle was regarded by Greek mathematicians and philosophers as the perfect geometric figure and consequently the only one appropriate for celestial motion. However, as astronomers observed, the patterns of celestial motion were not constant. The Moon rose about an hour later from one day to the next, and its path across the sky changed from month to month. The Sun's path, too, changed with time, and even the configuration of constellations changed from season to season.

These changes could be explained by the varying rates at which the celestial bodies revolved around the Earth. However, the planets (which got their name from the Greek word planetes, meaning wanderer and subject of error), behaved in ways that were difficult to explain. Sometimes, these wanderers showed retrograde motion—they seemed to stop and move in a reverse direction when viewed against the background of the distant constellations, or fixed stars, which did not move relative to one another.

To explain the motion of the planets, Greek astronomers, whose efforts culminated in the work of Claudius Ptolemy (c. 90-168 A.D.), devised complicated models in which planets moved along circles (epicycles) that were superimposed on circular orbits about the Earth. These geocentric models were able to explain, for example, why Mercury and Venus never move more than 28° and 47° respectively from the Sun.

As astronomers improved their methods of observation and measurement, the models became increasingly complicated, with constant additions of epicycles. While these complex models succeeded in explaining retrograde motion, they reportedly prompted Alfonso X (1221-1284), king of Castile, to remark that had God asked his advice while engaging in Creation, he would have recommended a simpler design for the universe. Nonetheless, the geocentric theory persisted because it worked.

The scientific refutation of geocentrism is associated with the work of the Polish astronomer Nicolaus The geocentric universe. .
Copernicus (1473-1543). In Commentariolus, a short work composed around 1514, Copernicus suggested a replacement for the replacement for the geocentric system. According to Copernicus, who fully developed his ideas in De revolutionibus orbium coelestium (1543), known as On the Revolution of the Celestial Spheres, a heliocentric theory could explain the motion of celestial bodies more simply than the geocentric view. In the Copernican model, the Earth orbits the Sun along with all the other planets. Such a model can explain the retrograde motion of a planet without resorting to epicycles, and can also explain why Mercury and Venus never stray more than 28° and 47° from the Sun.

Copernicus's work did not spell the demise of geocentrism, however. The Danish astronomer Tycho Brahe (1546-1601), a brilliant experimental scientist whose measurements of the positions of the stars and planets surpassed any that were made prior to the invention of the telescope, proposed a model that attempted to serve as a compromise between the geocentric explanation and the Copernican theory. His careful observation of a comet led him to the conclusion that the comet's orbit could not be circular; but despite this insight, he was unable to abandon the geocentric system. Instead, he proposed a model which preserved the ancient geometric structure, but suggested that all the planets except the Earth revolved around the Sun. The Sun, however, in accordance with the geocentric view, carrying all the planets with it, still moved about the Earth.

After Galileo (1564-1642) built a telescope and turned it toward the heavens, evidence supporting a heliocentric model started to accumulate. Through his refracting (using lenses to form images), Galileo saw that Venus and Mercury go through phases similar to those of the Moon. The geocentric model could not fully explain these changes in the appearance of the inferior planets (the planets between the Earth and the Sun). Furthermore, Galileo's observations of Jupiter's moons made it clear that celestial bodies do move about centers other than the Earth.

Around the time when Galileo began surveying the skies with his telescope, Johannes Kepler (1571-1630), a remarkable mathematician and theoretical astronomer, used Brahe's precise measurements to determine the exact paths of the planets. Kepler was able to show that the planets did not move along circular paths, but rather that each planet followed an elliptical course, with the Sun at one focus of the ellipse. The fact that the orbits of the planets about the Sun are ellipses became known as Kepler's first law. His second law states that for each planet, In ancient geocentric theory, Earth was the center of the universe, and the body around which the Sun and planets revolved. .
an imaginary line connecting the planet to the Sun sweeps out equal areas in equal times; and the third law, which was later used by Isaac Newton (1642-1727) in establishing the universal law of gravitation, reveals that the ratio of the cube of a planet's semimajor axis to the square of its period (the time to make one revolution) is a constant; that is, the ratio is the same for all the planets. By the time Newton established the laws of motion—laws that he demonstrated to be valid for both celestial and earthly objects—there was no doubt that the workings of the solar systems clearly invalidated the geocentric model.

Winchester, Simon, and Soun Vannithone. The Map That Changed the World: William Smith and the Birth of Modern Geology. New York: Perennial, 2002.