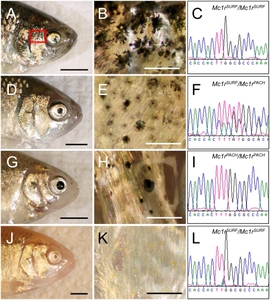 A genotype describes the actual set (complement) of genes carried by an organism. In contrast, phenotype refers to the observable expression of characters and traits coded for by those genes.

Although phenotypes are based upon the content of the underlying genes comprising the genotype, the expression of those genes in observable traits (phenotypic expression) is also, to varying degrees, influenced by environmental factors.

The exact relationship between genotype and disease is an area of intense interest to geneticists and physicians and many scientific and clinical studies focus on the relationship between the effects of a genetic changes (e.g., changes caused by mutations) and disease processes. These attempts at genotype/phenotype correlations often require extensive and refined use of statistical analysis.

Genotype and phenotype represent very real differences between genetic composition and expressed form. The genotype is a group of genetic markers that describes the particular forms or variations of genes (alleles) carried by an individual. Accordingly, an individual's genotype includes all the alleles carried by that individual. An individual's genotype, because it includes all of the various alleles carried, determines the range of traits possible (e.g., a individual's potential to be afflicted with a particular disease). In contrast to the possibilities contained within the genotype, the phenotype reflects the manifest expression of those possibilities (potentialities). Phenotypic traits include obvious observable traits as height, weight, eye color, hair color, etc. The presence or absence of a disease, or symptoms related to a particular disease state, is also a phenotypic trait.

A clear example of the relationship between genotype and phenotype exists in cases where there are dominant and recessive alleles for a particular trait. Using an simplified monogenetic (one gene, one trait) example, a capital "T" might be used to represent a dominant allele at a particular locus coding for tallness in a particular plant, and the lowercase "t" used to represent the recessive allele coding for shorter plants. Using this notation, a diploid plant will possess one of three genotypes: TT, Tt, or tt (the variation tT is identical to Tt). Although there are three different genotypes, because of the laws governing dominance, the plants will be either tall or short (two phenotypes). Those plants with a TT or Tt genotype are observed to be tall (phenotypically tall). Only those plants that carry the tt genotype will be observed to be short (phenotypically short).

Although the relationships between genetic and environmental influences vary (i.e., the degree to which genes specify phenotype differs from trait to trait), in general, the more complex the biological process or trait, the greater the influence of environmental factors. The genotype almost completely directs certain biological processes. Genotype, for example, strongly determines when a particular tooth develops. How long an individual retains a particular tooth, is to a much greater extent, determined by environmental factors such diet, dental hygiene, etc.

Because it is easier to determine observable phenotypic traits that it is to make an accurate determination of the relevant genotype associated with those traits, scientists and physicians place increasing emphasis on relating (correlating) phenotype with certain genetic markers or genotypes.

There are, of course, variable ranges in the nature of the genotype-environment association. In many cases, genotype-environment interactions do not result in easily predictable phenotypes. In rare cases, the situation can be complicated by a process termed phenocopy where environmental factors produce a particular phenotype that resembles a set of traits coded for by a known genotype not actually carried by the individual. Genotypic frequencies reflect the percentage of various genotypes found within a given group (population) and phenotypic frequencies reflect the percentage of observed expression. Mathematical measures of phenotypic variance reflect the variability of expression of a trait within a population.