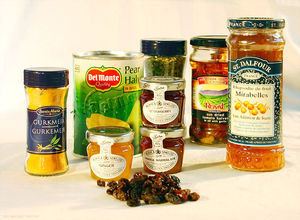 The term food preservation refers to any one of a number of techniques used to prevent food from spoiling. It includes methods such as canning, pickling, drying and freeze-drying, irradiation, pasteurization, smoking, and the addition of chemical additives. Food preservation has become an increasingly important component of the food industry as fewer people eat foods produced on their own lands, and as consumers expect to be able to purchase and consume foods that are "out of season."

Early humans probably discovered by accident that certain foods exposed to smoke seem to last longer than those that are not. Meats, fish, fowl, and cheese were among such foods. It appears that compounds present in wood smoke have anti-microbial actions that prevent the growth of organisms that cause spoilage.

Today, the process of smoking has become a sophisticated method of food preservation with both hot and cold forms in use. Hot smoking is used primarily with fresh or frozen foods, while cold smoking is used most often with salted products. The most advantageous conditions for each kind of smoking—air velocity, relative humidity, length of exposure, and salt content, for example–are now generally understood and applied during the smoking process. For example, electrostatic precipitators can be employed to attract smoke particles and improve the penetration of the particles into meat or fish.

So many alternative forms of preservation are now available that smoking no longer holds the position of importance it once did with ancient peoples. More frequently the process is used to add interesting and distinctive flavors to foods.

Since most disease-causing organisms require a moist environment in which to survive and multiply, drying is a natural technique for preventing spoilage. Indeed, the act of simply leaving foods out in the sun and wind to dry out is probably one of the earliest forms of food preservation. Evidence for the drying of meats, fish, fruits, and vegetables go back to the earliest recorded human history.

At some point, humans also learned that the drying process could be hastened and improved by various mechanical techniques. For example, the Arabs learned early on that apricots could be preserved almost indefinitely by macerating them, boiling them, and then leaving them to dry on broad sheets. The product of this technique, quamaradeen, is still made by the same process in modern Muslim countries.

Today, a host of dehydrating techniques are known and used. The specific technique adopted depends on the properties of the food being preserved. For example, a traditional method for preserving rice is to allow it to dry naturally in the fields or on drying racks in barns for about two weeks. After this period of time, the native rice is threshed and then dried again by allowing it to sit on straw mats in the sun for about three days.

Modern drying techniques make use of fans and heaters in controlled environments. Such methods avoid the uncertainties that arise from leaving crops in the field to dry under natural conditions. Controlled temperature air drying is especially popular for the preservation of grains such as maize, barley, and bulgur.

Vacuum drying is a form of preservation in which a food is placed in a large container from which air is removed. Water vapor pressure within the food is greater than that outside of it, and water evaporates more quickly from the food than in a normal atmosphere. Vacuum drying is biologically desirable since some enzymes that cause oxidation of foods become active during normal air drying. These enzymes do not appear to be as active under vacuum drying conditions, however.

Two of the special advantages of vacuum drying is that the process is more efficient at removing water from a food product, and it takes place more quickly than air drying. In one study, for example, the drying time of a fish fillet was reduced from about 16 hours by air drying to six hours as a result of vacuum drying.

Coffee drinkers are familiar with the process of dehydration known as spray drying. In this process, a concentrated solution of coffee in water is sprayed though a disk with many small holes in it. The surface area of the original coffee grounds is increased many times, making dehydration of the dry product much more efficient.

Freeze-drying is a method of preservation that makes use of the physical principle known as sublimation. Sublimation is the process by which a solid passes directly to the gaseous phase without first melting. Freeze-drying is a desirable way of preserving food since it takes place at very low temperatures (commonly around 14°F to -13°F [-10°C to -25°C]) at which chemical reactions take place very slowly and pathogens survive only poorly. The food to be preserved by this method is first frozen and then placed into a vacuum chamber. Water in the food first freezes and then sublimes, leaving a moisture content in the final product of as low as 0.5%.

The precise mechanism by which salting preserves food is not entirely understood. It is known that salt binds with water molecules and thus acts as a dehydrating agent in foods. A high level of salinity may also impair the conditions under which pathogens can survive. In any case, the value of adding salt to foods for preservation has been well known for centuries.

Sugar appears to have effects similar to those of salt in preventing spoilage of food. The use of either compound (and of certain other natural materials) is known as curing. A desirable side effect of using salt or sugar as a food preservative is, of course, the pleasant flavor each compound adds to the final product.

Curing can be accomplished in a variety of ways. Meats can be submerged in a salt solution known as brine, for example, or the salt can be rubbed on the meat by hand. The injection of salt solutions into meats has also become popular. Food scientists have now learned that a number of factors relating to the food product and to the preservative conditions affect the efficiency of curing. Some of the food factors include the type of food being preserved, the fat content, and the size of treated pieces. Preservative factors include brine temperature and concentration and the presence of impurities.

Curing is used with certain fruits and vegetables, such as cabbage (in the making of sauerkraut), cucumbers (in the making of pickles), and olives. It is probably most popular, however, in the preservation of meats and fish. Honey-cured hams, bacon, and corned beef ("corn" is a term for a form of salt crystals) are common examples.

A number of factors are involved in the selection of the best approach to the freezing of foods, including the temperature to be used, the rate at which freezing is to take place, and the actual method used to freeze the food. Because of differences in cellular composition, foods actually begin to freeze at different temperatures ranging from about 31°F (-0.6°C) for some kinds of fish to 19°F (-7°C) for some kinds of fruits.

The rate at which food is frozen is also a factor, primarily because of aesthetic reasons. The more slowly food is frozen, the larger the ice crystals that are formed. Large ice crystals have the tendency to cause rupture of cells and the destruction of texture in meats, fish, vegetables, and fruits. In order to deal with this problem, the technique of quick-freezing has been developed. In quick-freezing, a food is cooled to or below its freezing point as quickly as possible. The product thus obtained, when thawed, tends to have a firm, more natural texture than is the case with most slow-frozen foods.

About a half dozen methods for the freezing of foods have been developed. One, described as the plate, or contact, freezing technique, was invented by the American inventor Charles Birdseye in 1929. In this method, food to be frozen is placed on a refrigerated plate and cooled to a temperature less than its freezing point. Or, the food may be placed between two parallel refrigerated plates and frozen.

Another technique for freezing foods is by immersion in very cold liquids. At one time, sodium chloride brine solutions were widely used for this purpose. A 10% brine solution, for example, has a freezing point of about 21°F (-6°C), well within the desired freezing range for many foods. More recently, liquid nitrogen has been used for immersion freezing. The temperature of liquid nitrogen is about -320°F (-195.5°C), so that foods immersed in this substance freeze very quickly.

As with most methods of food preservation, freezing works better with some foods than with others. Fish, meat, poultry, and citrus fruit juices (such as frozen orange juice concentrate) are among the foods most commonly preserved by this method.

Fermentation is a naturally occurring chemical reaction by which a natural food is converted into another form by pathogens. It is a process in which food "goes bad," but results in the formation of an edible product. Perhaps the best example of such a food is cheese. Fresh milk does not remain in edible condition for a very long period of time. Its pH is such that harmful pathogens begin to grow in it very rapidly. Early humans discovered, however, that the spoilage of milk can be controlled in such a way as to produce a new product, cheese.

Bread is another food product made by the process of fermentation. Flour, water, sugar, milk, and other raw materials are mixed together with yeasts and then baked. The addition of yeasts brings about the fermentation of sugars present in the mixture, resulting in the formation of a product that will remain edible much longer than will the original raw materials used in the bread-making process.