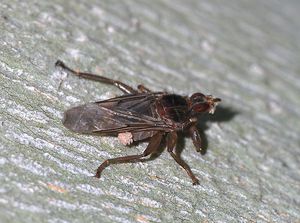 Commensalism is a type of symbiosis, specifically, a biological relationship in which one species benefits from an interaction, while the host species is neither positively or negatively affected to any tangible degree.

For example, epiphytic plants (which grow on other plants but are not parasitic) gain an enormous ecological benefit from living on larger plants, because they gain access to a substrate upon which to grow relatively high in the canopy. The host trees, however, are not affected in any significant way by this relationship, even in cases when they are supporting what appears to be a large population of epiphytes. Some plants are specialized as epiphytes, for example, many species of airplants or bromeliads (family Bromeliaceae), orchids (Orchidaceae), and ferns (Pterophyta). Many lichens, mosses, and liverworts are also epiphytes on trees. There are also animal analogues of this relationship. Sometimes sea anemones (order Actiniaria) will gain a benefit in terms of food availability by growing on the upper carapace of a hermit crab (crustacean infraorder Anomura) which is apparently unaffected by the presence of the epiphyte.

Another commensal relationship, known as phoresy, is a type of biological hitch-hiking in which one organism benefits through access to a mode of transportation while the animal providing this service is not significantly affected by its role. For example, many plants produce fruits that adhere to fur and are thereby dispersed by the movement of mammals. Some North American examples of such animal-dispersed plants are the burdock (Arctium lappa), beggar-tick or stick-tight (Bidens frondosa), and tick-trefoil (Desmodium canadense). The fruits of these plants have special anatomical adaptations for adhering to fur-in fact, those of the burdock are the botanical model from which the idea for the very useful fastening material known as velcro was developed. In a few cases, individual animals may become heavily loaded with these sorts of sticky fruits causing their fur to mat excessively, perhaps resulting in a significant detriment. This is not common, however, and usually this biological relationship is truly commensal.