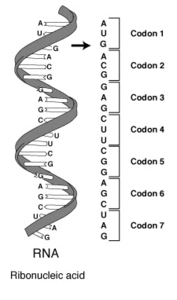 Codons are complimentary to base triplets in the DNA. For example, if the base triplet in the DNA sequence is GCT, the corresponding codon on the mRNA strand will be CGA.

Because there are four possible nucleotide bases to be incorporated into a three base sequence codon, there are 64 possible codons (43 = 64). Sixty-one of the 64 codons signify the 20 known amino acids in proteins. These codons are ambiguous codons, meaning that more than one codon can specify the same amino acid. For example, in addition to GCA, five additional codons specify the amino acid arginine. Because the RNA/DNA sequence cannot be predicted from the protein, and more than possible sequence may be derived from the same sequence of amino acids in a protein, the genetic code is said to be degenerate.

The remaining three codons are known as stop codons and signal one of three termination sequences that do not specify an amino acid, but rather stop the synthesis of the polypeptide chain.

Research began on deciphering the genetic code in several laboratories during the 1950s. By the early 1960s, an in vitro system was able to produce proteins through the use of synthetic mRNAs in order to determine the base composition of codons. The enzyme, polynucleotide phosphorylase, was used to catalyze the formation of synthetic mRNA without using a template to establish the nucleotide sequence. In 1961, English molecular biologist Francis Crick's research on the molecular structure of DNA provided evidence that three nucleotide bases on an mRNA molecule (a codon) designate a particular amino acid in a polypeptide chain. Crick's work then helped to establish which codons specify each of the 20 amino acids found in a protein. During that same year, Marshall W. Nirenberg and H. Matthei, using synthetic mRNA, were the first to identify the codon for phenylalanine. Despite the presence of all 20 amino acids in the reaction mixture, synthetic RNA polyuridylic acid (poly U) only promoted the synthesis of polyphenylalanine. Soon after Nirenberg and Matthei correctly determined that UUU codes for phenylalanine, they discovered that AAA codes for lysine and CCC codes for proline.

Eventually, synthetic mRNAs consisting of different nucleotide bases were developed and used to determine the codons for specific amino acids.

In 1968, American biochemists Marshall W. Nirenberg, Robert W. Holley, and Har G. Khorana won the Nobel Prize in Physiology or Medicine for discovering that a three nucleotide base sequence of mRNA defines a codon able to direct the insertion of amino acids during protein sythesis (translation).