When we make and eat a meal, there is nearly always waste. When we go to the toilet, we rid our bodies of waste. This waste comes from the food we have eaten. Imagine none of this waste was cleared up. It would soon cover the Earth. Decomposers are nature's way of removing and recycling waste food. 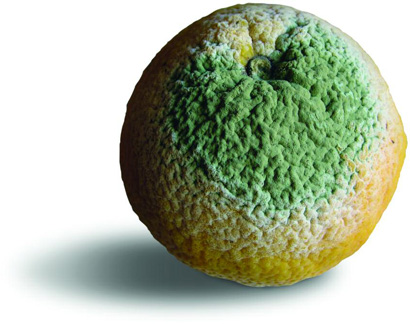 The mold on this orange is a kind of fungus, called penicillium. The fungus grows by drawing nutrients from the orange.

DECAY IN THE GARDEN 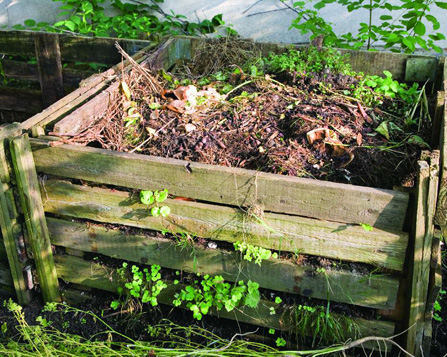 To see decay at work, start a compost pile. A compost pile is made of garden and kitchen waste. Decomposers get to work on the leaves, dead flowers, grass cuttings, and vegetable peelings. Soon they begin to rot. After a few months, the garden waste has turned into rich compost. Compost is “food” for the garden soil. It will help plants grow faster.

Decomposers make things rot. They break down plant and animal waste—everything from dead trees to insect droppings. Decomposers turn these into minerals and other simple substances. These enrich the soil and help new plants grow.

Bacteria and fungi are important decomposers. They break down the chemicals in living things. They turn them into nutrients for plants. Some larger animals also help the process of decay.

These include earthworms, slugs, and many insects. Slugs eat dead and rotting plant material on the ground. Earthworms eat the soil itself. Insects such as maggots and some flies eat dead animals. Other insects such as termites and beetles tunnel in wood. Dung beetles gather animal droppings. They bury the waste as food for their young.

These animals have important jobs. They break up waste. This makes it easier for the real decomposers to get to work. 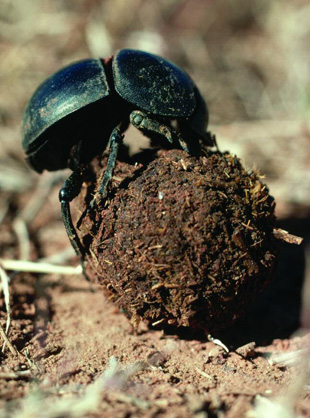 Dung beetles gather animal droppings and roll them into a large ball. Then they lay their eggs along with the ball of dung. When the eggs hatch, they feed on the animal dung. 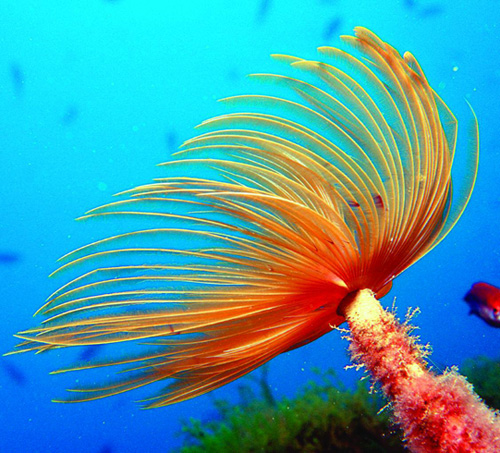 In the ocean, most animal waste falls to the ocean floor. Here creatures such as crabs, starfish, and sea urchins feed on the waste. Other animals do not wait for the waste to fall to the bottom. Barnacles, mussels, and many other creatures are filter feeders. They stay in one place. There, they filter small pieces of food out of the water. 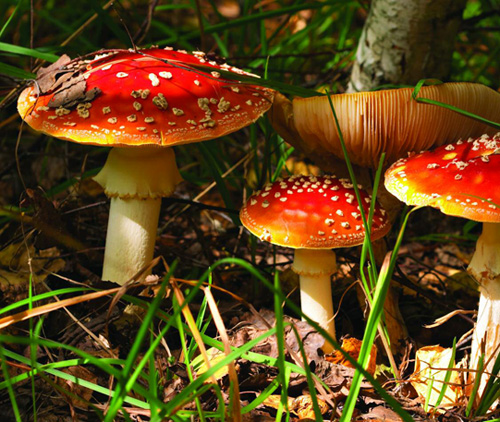 Fungi are among the most important decomposers in woodland. These poisonous woodland fungi are called fly agaric.

Waste material is broken up into small pieces. Then small decomposers go to work. There are thousands of kinds of bacteria in the soil. Different types of bacteria feed on different chemicals in the soil. The waste that they produce is simple chemicals such as nitrates. These are important plant nutrients.

WHEN THE GOING GETS TOUGH…

One of the toughest substances in living things is lignin. It makes wood hard and strong. Most bacteria and fungi cannot break down lignin. However, some microbes can soften it. These microbes are actinomycetes. They are similar to bacteria and grow in long threads, like fungi.

Fungi are also important decomposers. The mushrooms and toadstools that we think of as fungi are not the main part of the fungus. The “body” of a fungus is a network of fine threads spread through the soil. 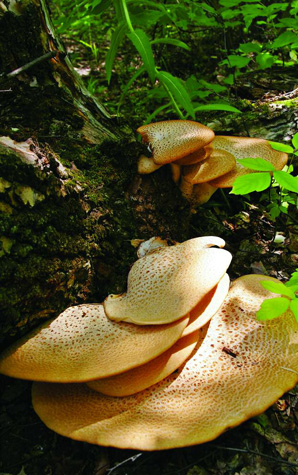